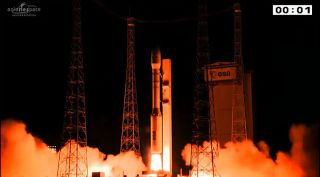 Operating from its dedicated launch pad at Europe's Guiana Space Center in French Guiana, on the northeast coast of South America, the Vega rocket logged its seventh success in seven missions conducted since it was inaugurated in 2012.

For Vega's developer, ELV — co-owned by Avio of Italy and the Italian Space Agency — the vehicle's success has been not only in traversing its early launches without a failure, but also in completing complex, multi-orbit missions in the same launch.

European governments, led by Italy, have agreed to increase Vega's performance starting in 2019 as part of an investment that includes the heavy-lift Ariane 6 rocket.

How far Vega still must go to reduce its recurring production cost is unclear. Several new rockets are coming onto the market to compete directly with it. Launch-service provider Arianespace of Evry, France, which operates Vega alongside the current Ariane 5 and the Europeanized Soyuz medium-lift vehicle, has said Vega's commercial competitiveness will improve with Ariane 6 starting in 2020, and as the rocket increases its launch cadence to three per year.

In this mission, its Avum upper stage performed four ignition-and-cutoff maneuvers, needed to inject first the four Terra Bella SkySats into a 500-kilometer-altitude orbit, and then to continue on to place PeruSat into a 675-kilometer orbit.

Mountain View, California-based Terra Bella is owned by Google and operates a constellation of satellites for commercial Earth imaging — 90-centimeter resolution for black-and-white images and 2 meters for color and video.

The satellites were built by Space Systems Loral of Palo Alto, California, and follows that company's policy of expanding beyond its core business of large, high-powered telecommunications satellites operated from geostationary orbit 36,000 kilometers over the equator.

PeruSat-1, to be operated by Peruvian military authorities, was built by Airbus Defence and Space and is designed to produce 70-centimeter imagery.

Michael Menking, senior vice president for Earth observation, navigation and science at Airbus, said before the launch that Airbus had delivered PeruSat, as specified by Peruvian authorities, in about two years following the signing of the contract in April 2014.

Under the contract, which was heavily competed and was valued at $194 million, Airbus was responsible for the satellite's construction and the selection of the rocket.

The launch illustrates the current state of the global Earth observation business, where satellites with imagery sharper than 1 meter in resolution are now the norm.