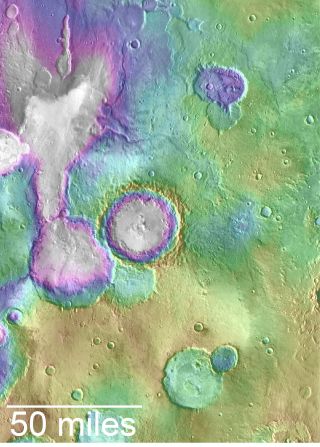 Valleys much younger than well-known ancient valley networks on Mars are evident near the informally named "Heart Lake" on Mars.
(Image: © NASA/JPL-Caltech/ASU)

Mars may have been able to support life for much longer than scientists had thought.

Some Red Planet streams and lakes — including one bigger than several of North America's Great Lakes — formed just 2 billion to 3 billion years ago, a new study suggests. That's a surprise, because researchers think that, by that epoch, Mars had already lost most of its atmosphere, and therefore had likely become too cold to host liquid water on its surface.

"This paper presents evidence for episodes of water modifying the surface on early Mars for possibly several hundred million years later than previously thought, with some implication that the water was emplaced by snow, not rain," Mars Reconnaissance Orbiter (MRO) project scientist Rich Zurek, of NASA's Jet Propulsion Laboratory in Pasadena, California, said in a statement. [Water on Mars: Exploration & Evidence]

Zurek was not part of the study team, which was led by Sharon Wilson of the Smithsonian Institution and the University of Virginia. Wilson and her colleagues studied photos of Mars' northern Arabia Terra region taken by three orbiters — MRO, NASA's Mars Global Surveyor probe and Europe's Mars Express spacecraft.

"We discovered valleys that carried water into lake basins," Wilson said in the same statement. "Several lake basins filled and overflowed, indicating there was a considerable amount of water on the landscape during this time."

"Considerable amount" indeed: One of the newly discovered lakes was about as big as Lake Tahoe, a body of water on the California-Nevada border that holds about 45 cubic miles (188 cubic kilometers) of water, Wilson said.

The study team arrived at their age estimate by looking at the valleys in the lake-and-stream system. Specifically, researchers checked if those valleys had carved into the aprons of debris surrounding 22 impact craters in the area whose rough ages were already known. (If a valley did cut into such an apron, water was flowing after the crater-creating impact occurred.)

Observations by MRO, NASA's Curiosity rover and other missions had already found strong evidence of lakes, streams and other bodies of liquid surface water in Mars' more ancient past — 3.7 billion years or so ago.

Scientists think the majority of Mars' atmosphere was lost to space shortly thereafter, cooling the planet down considerably. The new results are consistent with a cold climate, Wilson said.

"The rate at which water flowed through these valleys is consistent with runoff from melting snow," she said, "These weren't rushing rivers. They have simple drainage patterns and did not form deep or complex systems like the ancient valley networks from early Mars."

But it's unclear how that snow heated up enough to melt, she said. One possibility is a shift in Mars' axial tilt, which resulted in greater illumination of the ice caps at the planet's poles, researchers said. (Valleys like those seen in Arabia Terra also occur in Mars' southern hemisphere, suggesting that lakes and streams existed over broad stretches of the planet, study team members said.)

The new study has been accepted for publication in the Journal of Geophysical Research, Planets.