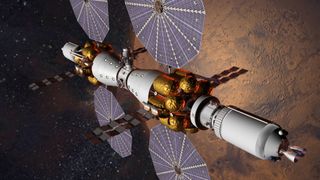 In a response to a questionnaire on science policy topics released Sept. 13 by ScienceDebate.org that represent some of her most detailed space policy comments to date, Clinton said she would build upon the progress made by NASA in space science, technology and exploration.

"Today, thanks to a series of successful American robotic explorers, we know more about the Red Planet than ever before," she said in response to a question about what the nation's space goals should be. "A goal of my administration will be to expand this knowledge even further and advance our ability to make human exploration of Mars a reality." [How a Manned NASA Mars Base Might Work (Images)]

Human missions to Mars became a formal long-term goal of NASA's human spaceflight program in 2010, when President Obama gave NASA the goal of sending humans to orbit Mars in the mid-2030s, to be followed by humans landing on the planet. NASA has since made the "Journey to Mars" the central theme of its space exploration efforts, including everything from research on the International Space Station to its controversial Asteroid Redirect Mission.

Clinton did not discuss additional details about Mars exploration, including any changes she would make to NASA's current plans or budgets. She broadly endorsed, though, NASA's overall efforts in space science and technology, as well as efforts develop commercial space partnerships that resulted in the ISS commercial cargo and crew programs.

"As president, my administration will build on this progress, promote innovation, and advance inspirational, achievable, and affordable space initiatives," she said in her questionnaire response. "I will work with Congress to ensure that NASA has the leadership, funding and operational flexibility necessary to work in new ways with industry, placing emphasis on inventing and employing new technologies and efficiencies to get more bang for the buck while creating jobs and growing the American economy."

The Republican presidential candidate, Donald Trump, offered a briefer and more general response. "Space exploration has given so much to America, including tremendous pride in our scientific and engineering prowess," he said. "A strong space program will encourage our children to seek [science, technology, engineering and math] educational outcomes and will bring millions of jobs and trillions of dollars in investment to this country."

Trump did not formally support a human Mars exploration program or other specific initiatives in his response. He did endorse international cooperation, saying that "space is not the sole property of America."

Trump, in responses two other questions on innovation and research, briefly mentioned space. "Similarly, the federal government should encourage innovation in the areas of space exploration and investment in research and development across the broad landscape of academia," he said in response to a question on how the U.S. would remain at the forefront of innovation. He also said "a viable space program" was critical to long-term research.

The questionnaire responses represent some of the most detailed responses to date on the issue of space policy, a topic that rarely gets much attention during presidential campaigns but has received even less this year. Neither candidate has yet offered many specifics about their space policies if elected.

What comments the major candidates have made about space have sometimes been contradictory. "Honestly I think NASA is wonderful! America has always led the world in space exploration," Trump wrote in response to a question about NASA posed on Reddit.com July 27. But in a speech in Daytona Beach, Florida, Aug. 3, Trump, discussing the state of the space program, said, "We're like a third world nation."

Neither candidate has devoted much attention to NASA as part of planning for a presidential transition. A change in federal law allows major party candidates to establish transition teams after receiving their parties' nominations, rather than waiting until after the November election.

However, in an interview after a plenary session of the AIAA Space 2016 conference here Sept. 13, NASA Administrator Charles Bolden said he was unaware of any contact with NASA from either candidate's transition team. "To my knowledge, we've not had any individual transition teams reaching out," he said.

Bolden, in a speech at the conference, said he hopes that NASA's Journey to Mars effort is retained by the next administration. "It's now up to us, all of us, to see it through beyond January," he told the audience.

One third-party presidential candidate, Jill Stein of the Green Party, also answered the space policy question. Stein said she supported the peaceful exploration of space, Earth observations from space and ensuring that space technology "benefits all the people of Earth."

"By focusing U.S. space efforts away from corporate and military interests, we can work to create peace here on Earth and in space, prevent the deployment of space weapons and instead focus on technologies to solve problems on Earth, not create new ones," she wrote.

Gary Johnson, the Libertarian Party candidate for president, did not respond to the questionnaire.