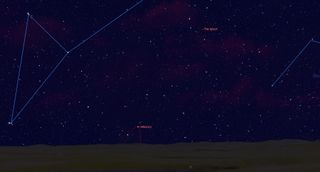 On Sept. 28, Mercury will rise at 5:30 a.m. local time, well before the sun, and shine brightly against the predawn sky. The planet will be at its maximum angle away from the sun on this date. The waning crescent moon will sit about 10 degrees above the planet; the duo is shown here at 6 a.m.
(Image: © Starry Night Software)

Mercury has a reputation for being hard to spot. Indeed, the planet is known in some circles as the "elusive planet."

I've used this nickname before in our Space.com forum, and it perfectly captures the general feeling about this rocky, little world. In his book "The Solar System and Back" (Doubleday, 1970), the famed scientist and author Isaac Asimov (1920-1992) argued that Mercury "is hardly ever visible when it is truly dark."

Mercury "will be seen only near the horizon in dawn or twilight, amid haze and sun glare," Asimov added. "I suspect, in fact, that many people today (when the horizon is dirtier and the sky much hazier with the glare of artificial light than it was in centuries past) have never seen Mercury." [10 Strange Facts About Mercury (A Photo Tour)]

From this description, I get the distinct impression that Asimov may never have laid eyes on Mercury. And yet, beginning on Sept. 19, people living north of the equator will have a great opportunity to view the planet in the early morning sky. On that day, the solar system's smallest planet will begin a three-week stretch during which it will be readily visible to anyone who has a clear and unobstructed view of the eastern horizon and is out looking about 45 minutes before sunrise.

On Monday (Sept. 12), Mercury moved through inferior conjunction — when the planet passes between Earth and the sun — and entered the morning sky. Mercury will quickly move out of the glare of the sun in subsequent days and will brighten rapidly.

In the pre-Christian era, Mercury actually had two names, as skywatchers then did not realize the planet could alternately appear on one side of the sun and then the other. Mercury was called Mercury when in the evening sky but was known as Apollo when it appeared in the morning. It is said that the famous Greek mathematician Pythagoras pointed out in the fifth century B.C. that Apollo and Mercury were one and the same.

In old Roman legends, Mercury was the swift-footed messenger of the gods. The planet is well-named, for it is the closest world to the sun and therefore the fastest-orbiting: Mercury travels at an average speed of 108,000 mph (174,000 km/h) and completes one orbit every 88 Earth days.

Interestingly, the time it takes Mercury to rotate once on its axis is 59 days, so all parts of the planet's surface experience periods of intense heat and extreme cold. Although Mercury's mean distance from the sun is just 36 million miles (57.9 million kilometers), the planet experiences by far the greatest range of temperatures: from 800 degrees Fahrenheit (427 degrees Celsius) on Mercury's dayside, all the way down to minus 280 degrees F (minus 173 degrees C) on the planet's nightside.

Mercury is called an "inferior planet" because its orbit is nearer to the sun than the Earth's. Therefore, Mercury always appears from an Earth-bound vantage point to be in the same general direction as the sun (as Asimov indicated).

After Monday (Sept. 12), Mercury rises before the sun for the rest of this month and will be surprisingly easy to see from Sept. 19 through Oct. 11. All you have to do is look low above the eastern horizon during morning twilight, about 45 minutes before sunrise. Mercury will appear as a bright, yellowish-orange "star."

Mercury will be at its greatest elongation (or greatest angular distance) west of the sun on the morning of Sept. 28. Greatest elongation will occur only 110 minutes after Mercury reaches perihelion (its closest point to the sun in space), so the planet's angular separation on this date is the minimum possible at a greatest elongation: just 17.85 degrees from the sun. (Your fist held at arm's length measures about 10 degrees across.)

Yet for observers in midnorthern latitudes, this elongation in the dawn sky is nearly vertical, placing Mercury due east and rising 90 minutes ahead of, and directly above, the sun. Mercury will rise as dawn breaks on Sept. 28 and shine at magnitude -0.4, making this the planet's best morning apparition of 2016. (Negative magnitudes represent brighter objects on the astronomers' scale; for comparison, Saturn's maximum brightness is magnitude 0, while that of Sirius, the Dog Star, is about -1.)

Mercury, like Venus and the moon, appears to go through phases. When Mercury makes its first appearance on Sept. 19, the planet will appear as a slender crescent, just 11 percent illuminated. At its greatest elongation, nine days later, Mercury will appear half-illuminated, and the amount of its surface illuminated by the sun will continue to increase thereafter. By Oct. 11, Mercury will be 91 percent illuminated. So although it will begin to turn back toward the sun's vicinity after Sept. 28, Mercury will continue to brighten steadily, which should keep it in easy view for another couple of weeks. [Visible Planets, September 2016: When, Where & How to See Them]

A visit from the moon and Jupiter

On Sept. 29, skywatchers will get a bonus: The slender sliver of a waning crescent moon, just 2 percent illuminated by the sun, will slide just over a degree to the lower left of Mercury. Once again, look low to the east about 45 minutes before sunrise for Mercury shining like an amber jewel to the upper right of the lunar sliver. Binoculars will enhance the view.

Mercury starts October still readily visible, approaching magnitude -1, surpassing the brilliance of every star in the sky with the exception of Sirius (the brightest of all stars). But the planet will also be getting noticeably lower in the dawn twilight. At the same time that Mercury is going down, Jupiter is coming up.

When October opens, Jupiter can be seen low in the east, midway through the morning twilight. But each morning thereafter, the king of planets rises earlier and climbs higher in the east. Finally, on the morning of Oct. 11, the biggest and smallest planets will rise side by side, separated by only 0.75 degrees, with Jupiter on the right and Mercury on the left. Look for them 5 degrees above the horizon about a half hour before sunrise.

That will be Mercury’s grand finale; thereafter, it will disappear into the glare of the sun.