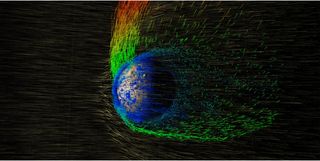 A long time ago, Mars had an atmosphere thick enough to allow running water on its surface. But today these vast gullies — and features that some scientists interpret as ocean shorelines — are bone-dry.

Something thinned the Red Planet's atmosphere over time, and there's a mission in orbit to find out how, when it happened and how quickly.

New results based on observations from MAVEN (Mars Atmosphere and Volatile EvolutioN Mission) have found a possible new source for losing the atmosphere. For years, scientists have known that the solar wind — that stream of charged particles coming from the sun — can strip away hydrogen molecules on Mars. The new study suggests that interstellar clouds are also partially responsible.

"MAVEN made it clear that ionizing radiation from the sun is the main driver as we it see now. I agree with those results 100 person, and am looking at geological timescales where encounters with interstellar clouds also becomes important," said lead author Dimitra Atri, of the Blue Marble Space Institute of Science, in an email interview with Discovery News.

The changes come as our solar system moves around the galaxy, Atri explained. From time to time, we move through interstellar clouds — vast, dense clouds of gas and dust — in events that last for about a million years. This has happened at least 135 times since the solar system was formed 4.5 billion years ago, Earth's geological records suggest. Each time, the gas and dust in the cloud strike the solar wind and create a bow shock. This shock accelerates charged particles (protons), which Atri suggests will make Mars lose 0.5 percent of its atmosphere each time.

WATCH VIDEO: Atomic Oxygen Found On Mars! What Does It Mean?

Atri hopes to follow up with the research by looking at historical solar events and how they affect the Martian atmosphere. His current study was published in the Monthly Notices of the Royal Astronomical Society.