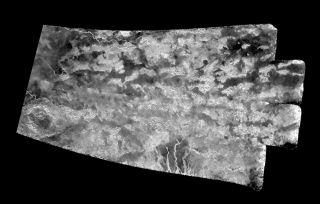 New close-up photos of Titan, Saturn's biggest moon, show its mysterious and massive dunes in more detail than ever before.

NASA's Cassini orbiter obtained these images when it flew by Titan for the 122nd time on July 25, 2016. The spacecraft was just 607 miles (976 kilometers) above the alien moon's southern hemisphere, according to NASA officials.

The new images include an area called the "Shangri-La Sand Sea," a large dark region with hundreds of long and linear sand dunes. A part of this region had been imaged before, but the new image covers more ground and in greater detail. You can see new video of Titan's 'Shangri-La Sand Sea' by NASA here.

Another image reveals the never-before-seen "Xanadu annex," which lies just south of Xanadu, a region with an Earth-like landscape first imaged by Cassini in 1994. [Amazing Photos: Titan, Saturn's Largest Moon]

Because Titan's atmosphere is thick and hazy, its surface is not easily visible with ordinary cameras. But Cassini comes equipped with a special radar instrument that allows it to see through the obstructing fog by beaming radio waves down to the surface.

Cassini's radio waves bounce off of Titan's surface, and the different ground features reflect the waves back at Cassini with different timing and slightly altered wavelengths. By recording these changes to the radio waves, Cassini's radar instrument can construct an image of the landscapes beneath Titan's atmosphere.

Titan's surface is teeming with dunes similar to sand dunes here on Earth, but they aren't made of silicates like our sand. Instead, Titan's sand contains grainy hydrocarbons that formed in its atmosphere before precipitating onto the ground.

The dunes reach heights of more than 300 feet (91 meters), which is gigantic compared to average sand dunes on Earth. Their structures can reveal information about Titan's surface topography and wind patterns. [Titan Sand Dunes Reveal Clues of Saturn Moon's Past]

These new images of Titan's southern terrain will also be Cassini's last. The spacecraft will spend the remainder of its mission checking out lakes and seas in the north. After four more flybys of Saturn's giant moon, Cassini will end its mission by plunging straight into Saturn's atmosphere.