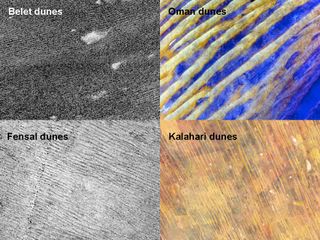 Data from NASA's Cassini spacecraft show that dunes on Saturn's moon Titan vary as a function of altitude and latitude. Dunes in areas that are more elevated or are higher in latitude, such as in the Fensal region (bottom left), are thinner and more widely separated, akin to dunes in Earth's Kalahari Desert (bottom right). Dunes in Titan's lower-elevation, lower-latitude Belet region (top left) are wider, like Earth's Oman dunes in Yemen and Saudi Arabia (top right).
(Image: © NASA/JPL-Caltech; NASA/GSFC/METI/ERSDAC/JAROS and U.S./Japan ASTER Science Team)

The huge sand dunes on Saturn's moon Titan vary according to elevation and latitude, providing clues about the alien world's climatic and geological history, a new study reports.

Researchers found that dunes are bigger and thicker in Titan's southern latitudes, and at relatively lower altitudes. They made the discovery after sifting through radar observations made by NASA's Cassini spacecraft.

Dune fields are the second-most dominant landform on Titan, which at 3,200 miles (5,150 kilometers) wide is Saturn's largest moon. Dunes stretch across 4 million square miles (10 million square km) of the giant, frigid moon — roughly equivalent to the surface area of the United States.

Titan's dune fields are restricted to the moon's equatorial regions, from roughly 30 degrees south latitude to 30 degrees north. They're bigger than those on Earth; on average, Titan's dunes are 0.6 to 1.2 miles (1 to 2 km) wide, hundreds of miles long and about 300 feet (90 meters) high.

Unlike Earth's sand, which is made of silicates, Titan's is likely composed of solid hydrocarbons that have precipitated out of the moon's thick atmosphere, scientists believe. This material has clumped into grains about 0.04 inches (1 millimeter) across, by a still-unknown process.

The observation that Titan's dunes are larger and more closely packed at lower elevations suggests that the sand needed to build them is found mostly in the moon's lowlands, researchers said.

And the fact that dunes are more voluminous in the south may be a consequence of Saturn's slightly elliptical orbit.

This orbit dictates that the southern hemisphere of Titan has shorter but more intense summers compared to the north, researchers said. As a result, the moon's southern regions are probably drier — meaning sand grains there are likely drier, too, and easier for Titan's winds to transport and sculpt into dunes.

"As one goes to the north, we believe the soil moisture probably increases, making the sand particles less mobile and, as a consequence, the development of dunes more difficult," study leader Alice Le Gall, of the French research laboratory LATMOS in Paris, said in a statement.

The asymmetrical distribution of Titan's lakes and seas backs up this hypothesis, researchers said. These reserves of liquid ethane and methane are found mostly in the moon's northern hemisphere, bolstering the supposition that soil is moister in the north (and thus that sand grains there are tougher for the wind to transport).

"Understanding how the dunes form as well as explaining their shape, size and distribution on Titan's surface is of great importance to understanding Titan's climate and geology because the dunes are a significant atmosphere-surface exchange interface," said the European Space Agency's Nicolas Altobelli, project scientist of the Cassini-Huygens mission.

"In particular," he added, "as their material is made out of frozen atmospheric hydrocarbon, the dunes might provide us with important clues on the still puzzling methane/ethane cycle on Titan, comparable in many aspects with the water cycle on Earth."