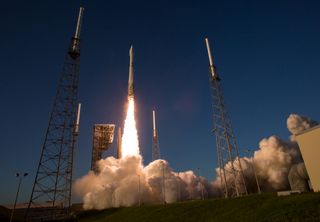 CAPE CANAVERAL, Fla. — NASA's OSIRIS-REx spacecraft is on its way to an intriguing asteroid named Bennu, and Dante Lauretta couldn't be happier.

Lauretta, the mission's principal investigator, said he was on pins and needles leading up to Thursday evening's (Sept. 8) launch from Cape Canaveral Air Force Station. But everything went off without a hitch, as OSIRIS-REx sailed smoothly into the heavens atop a United Launch Alliance Atlas V rocket.

"We got everything just exactly perfect," Lauretta, who's based at the University of Arizona's Lunar and Planetary Laboratory (LPL), said during a postlaunch news conference Thursday night from NASA's Kennedy Space Center. "All of the anomalies that we troubleshot — none of those came up. We hit all of our milestones within seconds of predicts [the predicted times]." [Launch Photos: OSIRIS-REx Blasts Off for Asteroid]

Indeed, the Atlas V delivered OSIRIS-REx (the name is short for Origins-Spectral Interpretation-Resource Identification-Security-Regolith Explorer) right where it needed to be to begin the two-year trek to asteroid Bennu, mission team members said. And less than two hours after launch, the spacecraft had deployed its solar arrays, initiated its propulsion system and established communications with Earth, they added.

"I can't tell you how thrilled I was this evening," Lauretta said. "It was a wild, emotional ride, thinking of everybody that's with us, that's not with us."

One person no longer with the team is Michael Drake, the original OSIRIS-REx principal investigator, whom Lauretta described as a mentor and a friend. Drake, who was the director of the LPL, died in September 2011, just four months after NASA officially selected the OSIRIS-REx mission.

If everything continues to go well, OSIRIS-REx will arrive at the 1,640-foot-wide (500 meters) Bennu in August 2018. The probe will study the asteroid from orbit for two years, and then grab at least 2 ounces (60 grams) of dirt and gravel from its surface in July 2020.

OSIRIS-REx will deliver this sample to Earth in September 2023. Scientists around the world will analyze the Bennu material, searching for organic molecules, the carbon-containing building blocks of life as we know it.

Such work should help researchers better understand the role asteroids like Bennu played in helping life get a foothold on Earth — the chief goal of the $800 million mission.

"I can't tell you how exciting this is," Jim Green, director of NASA's Planetary Science Division, said during Thursday's postlaunch briefing. "You're just going to have to take my word for it and watch it unfold."