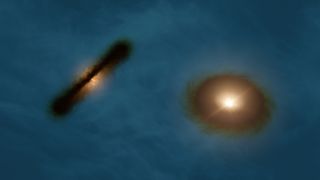 An artist's impression of the binary star system HK Tau shows the stars' misaligned disks. Measuring the orientation of the stars in multiple-star systems like this one could help astronomers learn how the stars came together.
(Image: © NASA/JPL-Caltech/IPAC/R. Hurt)

Stars that twinkle in the night sky may look like individual points of light when viewed from Earth, but these stars aren't as lonely as they appear. Most stars actually orbit with at least one stellar companion. Astronomers aren't sure how this happens, but new research finds that the way stars spin could offer evolutionary clues.

Stars are born when rotating clouds of dust and gas come together under the force of gravity. A cloud like this eventually collapses into a sphere that is surrounded by a "protostellar disk" of leftover stuff that may later form planets from a "protoplanetary disk."

Star formation in single-star systems is a straightforward process that is generally well-understood among astronomers. But when two, three or more stars occur in a gravitationally bound system, how they got together remains an open question. [Top 10 Star Mysteries]

Several existing hypotheses explain how such multiple-star systems could come together. Perhaps all stars are born alone, and some lasso others into their orbit with gravity. Or maybe the stars were born together from the same protostellar cloud. All of these hypotheses are difficult to verify, wrote the authors of the new study, because it's nearly impossible to observe these early evolutionary stages in action. Interstellar gas and dust get in the way, plus it can take around 100,000 years for a star to form.

Two models that describe the births of multiple-star systems rely on numerical simulations rather than observational evidence. One is turbulent fragmentation, which says that some type of turbulence within the core of a newly forming star causes multiple clumps of dense gas to separate at the center. Under this model, the clumps independently form stars, but the resulting stars end up orbiting a common center of mass.

The other model centers on a process called disk fragmentation. In this model, gravitational instabilities inside the protostellar disk can cause a rapid collapse of gas in a small chunk of the disk. This creates another, smaller disk inside of the existing disk, eventually producing a binary system of stars with different masses orbiting their common center of mass.

While there is no way to directly observe a star system and see how multiple stars came together, researchers may have a tool for narrowing down the possibilities to one of these two proposed models. In a new study published in The Astrophysical Journal Letters, Stella Offner and colleagues showed how the angular momentum and alignment of stars in a multistar system can reveal how those systems initially formed.

To check the alignment of stars in a system, astronomers can look for the protostellar outflows, or jets, of material spewing from a young star's north and south poles, the study suggests. These jets line up with the stars' axes of rotation.

"The changing angular momentum of the accreting turbulent gas and the orbital interaction between the protostars causes significant spin evolution," or a change in the star's orientation, the  authors wrote. "The angle differences [in a binary] are caused by changes in both spins rather than primarily one or the other."

Based on the models, stars in systems that formed via turbulent fragmentation would have misaligned spins and would orbit on axes that are not parallel. This is because each individual protostellar blob formed its own star independently, so their angular momentum is more randomly oriented, the authors wrote.

On the other hand, during disk fragmentation, a smaller protostellar disk forms within a larger disk and is not independent of its surroundings. These resulting stars should have aligned spins, the researchers suspected, because one is dependent on the other.

The team began its computer simulations with a spherical core of protostellar stuff, which they subjected to random turbulence. Of the 12 simulations, five produced single-star systems, five resulted in binary stars and two were triple-star systems.

To test the results against real observational evidence, the team created synthetic observations from its data and compared these to actual observations of protostellar outflows in young binaries.

The real observations came from a stellar survey called Mass Assembly of Stellar Systems and their Evolution with the Submillimeter Array (MASSES). The Submillimeter Array (SMA) is a network of radio telescopes located atop Mauna Kea, Hawaii, that is specially designed to look at cold interstellar gas and dust.

Offner's team found that its simulations of disk turbulence in new star systems were consistent with observations made by MASSES. The team's paper supports the idea that multiple-star systems containing misaligned stars likely formed via turbulent fragmentation and not via disk fragmentation. However, MASSES has surveyed only 19 binary star pairs, so the authors cautioned against jumping to conclusions before having more observational evidence to back up their findings.