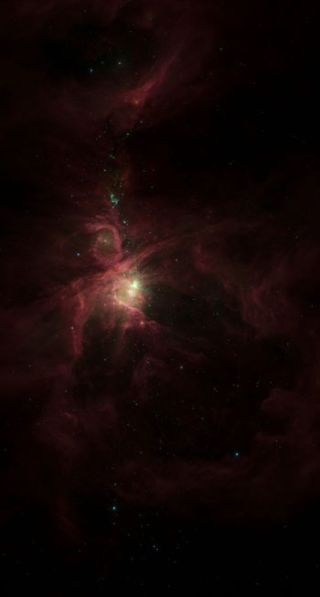 This infrared image from NASA's Spitzer Space Telescope shows the Orion nebula, our closest massive star-making factory, 1,450 light-years from Earth. In the center of the nebula are four monstrously massive stars, up to 100,000 times as luminous as our sun, called the Trapezium (tiny yellow smudge to the lower left of green splotches).
(Image: © NASA/JPL-Caltech/T. Megeath (University of Toledo))

Scientistshave long known that stars are formed from swirling clouds of gas and dust thatcoalesce. But why some of these stellar nurseries give rise to ordinary starslike our sun and others can pop out stars 15 to 30 times as massive issomething of a conundrum.

Astronomersworking with the SubmillimeterArray in Mauna Kea, Hawaii think they may have found the key difference:turbulence.

TheSubmillimeter Array (SMA) is so named because it probes the universe inwavelengths of light from 0.3 to 1.7 millimeters (0.01 to 0.07 inches). Mostradiation in this range comes from the cold interstellar gas and dust fromwhich stars and planets form.

The abilityto monitor this radiation comes in handy when astronomers are trying to peerinto stellarnurseries, whose cocoons ? all that dust and gas ?block visible light.

A team ofastronomers at the Harvard-Smithsonian Center for Astrophysics in Cambridge, Mass., used the SMA to probe two such cocoons located 15,000 light years away inthe constellation Serpens Cauda.

"TheSMA enables us to see the dust and gas in the cocoon with amazing details, andto probe the initial stages of massivestar formation," said team member Qizhou Zhang.

The team'sfindings will be detailed in an upcoming issue of The Astrophysical Journal.

The basicsof star formation are pretty clear: a cloud of cosmic gas tucked away insome part of a galaxy spins and coalesces under the pull of gravity. As it doesso, the gas grows denser and hotter until nuclear fusion ignites and a babystar is born.

Thegravitational pull that condenses the gas also tends to fragment it, fracturingthe condensing cloud into smaller and smaller pieces. Astronomers think thisfragmentation may inhibit the formation of massive stars because the resultingpieces are too small ? they eventually become mundane-sized stars like our sun.

But young,massive stars are clearly seen in some clouds; for example, the Orion Nebula(located in the Hunter's sword of the Orion constellation) is host to a clusterof newborn stars called the Trapezium that are many times more massive than oursun and 100,000 times as bright.

So somemechanism must allow the behemoth babies to form in these birthing clouds.

Someastronomers posit that such young, massive stars are the resultof collisions between smaller nascent stars. But this method requires an"extreme environment," Zhang told SPACE.com, and the stellarnurseries they have examined don't have a high enough density of protostars forcollisions to occur.

Anotherproposal that some force must be counteracting gravity and suppressingfragmentation in the clouds, allowing the massive stars to form outright, gatheringgas as smaller stars do.

Two suchforces are known to be at work in gas clouds: thermal pressure and turbulence.The thermal pressure is the result of the intense heat radiating from theprotostars. The turbulence is likely the result of spiral waves in galaxies,supernovas interacting with the clouds, or outflows of material from newbornstars, said Zhang's coauthor, Thushara Pillai.

Previouswork had suggested that thermal pressure was the strongest influence opposingfragmentation, but the new SMA study finds that turbulence is more important,at least at certain spatial scales.

"What'sunique about these SMA observations is that we can check some of the hypothesesfor massive star formation against the observations for the first time,"Zhang said. "Unlike what has been assumed in theoretical models, we foundthat fragmentation is suppressed in these clouds, not by stellar heating butrather by turbulence."

This wascontrary to previous theories because it was thought that "when youtrigger those turbulence [events], they die down very quickly," Zhangsaid. But that doesn't seem to be the case, and some feedback that perpetuatesthe turbulence must be in play.

While thisstudy has shed some light on massive star formation, it's a first step thatwill be followed-up by a more comprehensive survey of the regions where massivestars form that will look for signatures of stellar outflow and potentialfeedbacks of turbulence

"Wehave just started to understand the initial conditions in distant, massivestar-forming regions," Thushara Pillai said. "A large survey that wehave launched with the SMA will, in the near future, reveal the nature of moreof such objects."