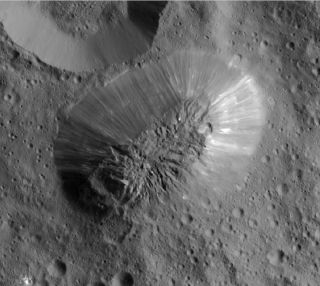 The dwarf planet Ceres is a complex and active world unlike any other place in the solar system, new research suggests.

Observations by NASA's Ceres-orbiting Dawn spacecraft indicate that "ice volcanos" have erupted on the dwarf planet in the recent past and that Ceres' crust is an odd ice-rock mixture that has never been observed before, scientists reported in a series of six new studies published online today (Sept. 1) in the journal Science.

"When we got to Ceres, we were expecting to be surprised, and we have been in many ways," Dawn principal investigator Chris Russell, a professor of geophysics and space physics at the University of California, Los Angeles (UCLA), told Space.com. [Watch: An Ice Volcano on Ceres]

"Ceres has been active during its history inside; the interior has been changing, evolving, much like the Earth's interior changes with time," added Russell, lead author of one of the new Science papers and co-author on the other five. "It's in the transition between the smaller asteroids and the Earth, in that it changes, and has changed, over the years from the time that the material initially came together."

Eyeing the queen of the asteroid belt

Dawn launched in September 2007 on a $467 million mission to study the two largest objects in the main asteroid belt between Mars and Jupiter — the 330-mile-wide (530 kilometers) protoplanet Vesta and Ceres, which is about 590 miles (950 km) across.

Dawn orbited Vesta from July 2011 through September 2012, when the probe departed for Ceres. The spacecraft arrived at the dwarf planet in March 2015, in the process becoming the first probe ever to orbit two different bodies beyond the Earth-moon system.

Scientists already knew a bit about Vesta, based on analyses of rocks that were blasted off the object long ago and have fallen to Earth as meteorites. Dawn's work confirmed suspicions that Vesta is basically "frozen in time," Russell said.

"It formed early and cooled off rapidly, and has just been a very solid body that was battered by impacts," he said.

Ceres was more mysterious, because no meteorite "family" is associated with the dwarf planet. But Dawn has discovered that Ceres is an altogether different beast than its asteroid belt neighbor, as the six new Science papers show.

For example, the surface of Ceres is much more diverse and complex than that of Vesta, possessing extensive linear structures, lobed features caused by flowing material and a 2.5-mile-high (4 km) mountain (in addition to numerous craters).

This massif, known as Ahuna Mons, resembles the dome-shaped mountains created by volcanism here on Earth, researchers reported in one of the new studies. And Dawn team members said they think Ahuna Mons was indeed created by a volcano, but one that spewed out cold, molten ice rather than hot, liquid rock.

The researchers — led by Ottaviano Ruesch, of NASA's Goddard Space Flight Center in Greenbelt, Maryland — said they aren't sure exactly what Ceres' "cryomagma" is made of, but they suggested it could be a mix of chlorine salts and water ice.

Furthermore, Ahuna Mons appears to be quite young, the researchers said. Analyses of crater counts suggest that the mountain formed in the last 200 million years or so, study team members said. (Like the rest of the solar system, Ceres itself formed about 4.56 billion years ago.)

In another one of the new studies, a team led by Debra Buczkowski,,of the Johns Hopkins University Applied Physics Laboratory in Laurel, Maryland, identified other dome-shaped features that also appear to be products of cryovolcanism (though not all of it as recent as the activity responsible for Ahuna Mons). Buczkowski and her colleagues also concluded that some of Ceres' linear features likely represent subsurface faults.

Ceres doesn't experience tidal heating; its insides are never churned and heated by another object's powerful gravitational pull, because Ceres never gets close enough to a giant planet. So the energy driving geological activity such as cryovolcanism must come from the dwarf planet's internal heat, Russell said — primarily the heat left over from the object's long-ago formation, with some contribution from radioactive decay processes.

"Ceres is cooling down, but it hasn't cooled down yet," he said.

Ceres is probably similar in this respect to Pluto, another dwarf planet that has remained geologically active into the recent past. (The powerful ice geysers that blast from the south polar region of the Saturn moon Enceladus, on the other hand, are driven by tidal heating.)

Astronomers know, based on Ceres' measured density, that the dwarf planet harbors a large amount of water. Over the years, there's been some speculation that a subsurface ocean such as the one on Enceladus may exist on Ceres.

If Ceres ever had such an ocean, it's probably gone now, Russell said. But the dwarf planet may still be able to support life as we know it, he added.

"We now know that there is water, and there is enough heat in the interior that that water can be in liquid form," Russell said. "There's certainly water, or brine, that can flow through the system and reach the surface." [Dwarf Planet Ceres' Intriguing Features Seen in New Detail (Video)]

Before Dawn got to Ceres, most astronomers thought the dwarf planet's crust consists primarily of water ice. But another one of the new Science studies, which is based on a detailed analysis of Ceres' many craters, suggested that's not the case.

Water ice is fairly soft, at least compared to rock. So if Ceres had a primarily icy shell, the dwarf planet's craters would tend to "relax," or flatten out, on relatively short timescales: 10 million to 100 million years or so, the researchers said. But study leader Harald Hiesinger, of the University of Munster in Germany, and his colleagues didn't find the expected relaxation.

Instead, Ceres' crater morphology suggests that the dwarf planet's crust is a strange mix of perhaps 60 percent rock and 40 percent ice, Russell said.

"This is something that we haven't seen before," he said.

"It's a new material to us — something that, if you hit it really hard, it will melt and flow, but you don't have to warm it up to the temperature of lava," Russell added. "We have many, many different areas where the material has flowed across the surface after having been hit by perhaps a meteorite or something of that nature." [Take a Trippy Trip Over Dwarf Planet Ceres (Video)]

Another of the new studies, this one led by Russell, suggested that Ceres may possess a thin atmosphere; such an "exosphere" could explain Dawn's observations of the solar wind interacting with the dwarf planet, the researchers wrote.

One of the other Science papers reported the probable detection of water ice, likely unearthed by an impact or landslide, at the bottom of a crater named Oxo. Another paper concluded that Ceres' surface was likely substantially altered by water at some point in the past, based on the widespread distribution of clay minerals (which only form in water).

These two studies were led by Jean-Philippe Combe (of the Bear Fight Institute in Winthrop, Washington) and Eleonora Ammannito (of UCLA), respectively.

Dawn should help astronomers refine their understanding of Ceres even more in the future; NASA recently extended the spacecraft's mission by an additional two years.

For the past eight months or so, Dawn has been studying Ceres from an altitude of just 240 miles (385 km). But on Friday (Sept. 2), the probe will begin spiraling out to a higher orbit, one that lies 910 miles (1,460 km) above the dwarf planet's surface.

The move will allow Dawn to save fuel, NASA officials said. In addition, Dawn should be able to make better targeted observations from the more distant orbit, Russell told Space.com.

During the remainder of the mission, the Dawn team will look hard for changes in Ceres' surface over time, to get a better handle on the dwarf planet's geological activity and processes, Russell said.

The team is particularly interested in better understanding how often material makes it from Ceres' subsurface onto the surface, he added.

"We know that there is liquid inside Ceres," Russell said. "Does it come out on a regular basis, or does it just leak out as vapor? Or are there outgassing events?"

A possible outgassing event occurred several years ago on Ceres: In January 2014, researchers reported that Europe's Herschel Space Observatory had detected a transient cloud of water vapor around the dwarf planet. Dawn is not equipped to detect water vapor directly, but the probe may be able to spot a plume by indirect means, Russell said.

The Herschel detection "suggested that there were times when there was more atmosphere than others," he said. "We would love to be able to check that out."