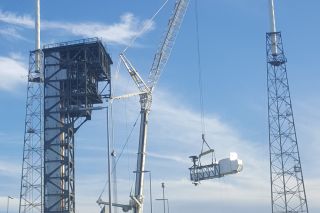 Crews use a crane to hoist the massive service structure into place during the Aug. 15, 2016 installation of the Boeing CST-100 Starliner's crew access arm.
(Image: © Amy Thompson/Space.com)

The arm, spanning roughly 50 feet (15 meters) in length and weighing over 90,000 lbs. (40,800 kilograms), will form a deployable bridge for the Commercial Crew Program astronauts to walk across. The structure is designed to swing away when not in use and will connect the crew access tower to the hatch of the spacecraft.

Constructed off-site at a nearby construction yard, the arm was transported to the launch complex last week. It connects to the 200-foot-tall (60 m) access tower, which is the first of its kind to be built in more than three decades, according to NASA. The tower is situated on an active launchpad, and it had to be constructed in segments. Construction should be finished later this year, and a crewed mission is expected to launch in 2018. [CST-100: Images of Boeing's Private Space Capsule]

At the end of the arm is the white room, which will be astronauts' last stop on Earth before they board the spacecraft. This type of room, which dates back to NASA's Gemini program from the 1960s and gets its name from the white paint coating the walls, is an integral part of any crewed mission. In this room, a support crew will help the astronauts make any final adjustments to their suits before they are strapped into their seats in the Starliner capsule, just 3 hours before liftoff.

The hatch will be sealed just 1 hour prior to launch, with the access arm and white room swinging away from the capsule approximately 10 minutes before liftoff, Boeing representatives explained. Once the countdown reaches zero, the spacecraft will blast off toward the International Space Station atop a United Launch Alliance (ULA) Atlas V rocket.

Crews began the installation process around 7:30 a.m. EDT (1130 GMT) on Monday morning, and the main event — the hoisting of the structure — occurred soon after. Once the arm was carefully maneuvered into place, it was welded and bolted to the tower.

The installation marks a major milestone in the project's development. "We started building this 18 months ago, and now it's one of the most visible changes to the Cape's horizon since the 1960s," Chris Ferguson, Boeing's deputy program manager for the company's Commercial Crew Program and former shuttle commander, told the media after the tower was hoisted into place.

The completion of the arm is another step forward for NASA's Commercial Crew Program. The agency, together with its partners SpaceX and Boeing, is working toward launching humans once again from American soil. Since the space shuttle's retirement in 2011, NASA has relied on Russian rockets to ferry astronauts to and from the space station.

With the Commercial Crew Program, NASA plans to not only reduce the cost of sending astronauts to and from space but also increase the number of astronauts on the station. Adding one more crewmember to the roster would double the amount of research that could be conducted on the station, NASA officials have said.

"It's going to be so cool when our astronauts are walking out across this access arm to get on the spacecraft and go to the space station," said Kathy Lueders, manager of NASA's Commercial Crew Program.

"I'm proud to be leading the team that is working to bring human spaceflight back to American soil," added Barb Egan, ULA's Commercial Crew Program manager. "In 1962, John Glenn was the first to fly on an Atlas, and now our next leap into the future will be to have Commercial Crew astronauts launch from here on an Atlas V."