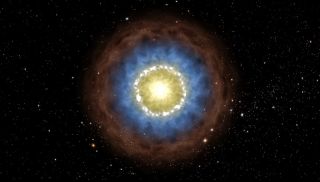 Shock waves from the explosive death of a supernova push through material from the star's red and blue supergiant phases.
(Image: © CAASTRO)

The quiet hiss of a nearby dead star revealed a glimpse of its final moments of life, leading up to a spectacular supernova seen from Earth in 1987.

A new study probing how wind from the explosion interacted with the material around the star has allowed scientists to spot traces of the last few million years of the star's lifetime — the farthest back in its history ever seen.

"Just like excavating and studying ancient ruins that teach us about the life of a past civilization, my colleagues and I have used low-frequency radio observations as a window into the star's life," Joseph Callingham, a Ph.D. candidate at the University of Sydney and the ARC Centre of Excellence for All-Sky Astrophysics (CAASTRO) in Australia, said in a statement. Callingham and his supervisor, Bryan Gaensler, former director of CAASTRO and now a professor at the University of Toronto, led an international team that studied supernova 1987A with the Murchison Widefield Array (MWA), a radio telescope in the desert of western Australia. [Supernova Photos: Great Images of Star Explosions]

"Our new data improves our knowledge of the composition of space in the region of supernova 1987A; we can now go back to our simulations and tweak them, to better reconstruct the physics of a supernova explosion," Callingham said.

A new look at an old explosion

When supernova 1987A exploded in February 1987, it was one of the brightest supernovas spotted from Earth since the invention of the telescope. Scientists around the world quickly turned their instruments to study the event, which played a significant role in scientists' understanding of the events that occur around the death of a star.

Even before it exploded, the star that created the well-known supernova was unusual. Scientists think that the red supergiant evolved into a blue supergiant 20,000 years before its death — an "abnormal evolutionary path," researchers wrote in the new paper. Winds from the star swept through the gas and dust surrounding it, leaving traces of the star's final moments, the researchers said.

After the star exploded, the shock waves from the explosion swept through the slower-moving winds. By studying the interaction between the two in low-frequency radio waves, astronomers can catch a glimpse of the final traces of the unusual star. They found that the enormous star lost its matter at a slower rate, and generated slower winds, than previously thought.

Before Callingham and his colleagues pointed the Australian instrument at the supernova, no one had studied the explosion in low radio frequencies, researchers said in the statement. Supernova 1987A sits too low in the sky for radio telescopes in the Northern Hemisphere to glimpse it, and those in the Southern Hemisphere had been decommissioned before the explosion. (MWA was not yet built.)

Currently, MWA provides the most detailed glimpse of the star's life before the explosion. However, the Square Kilometre Array — the world's largest radio telescope, which is currently under construction — would help provide an even more detailed look at an event like supernova 1987A. But the researchers calculated that by the time the Square Kilometre Array is operational in 2023, the shockwave will have moved into the surrounding circumstellar medium, material whose low density will keep the instrument from making better observations.

In the meantime, MWA is revealing quite a bit of insight. The instrument's location in the Australian desert has proved to be key, as it has provided a quiet environment to probe the radio wavelengths.

"Nobody knew what was happening at low radio frequencies, because the signals from our own earthbound FM radio drown out the faint signals from space," Gaensler said in the same statement.

"Now, by studying the strength of the radio signal, astronomers — for the first time — can calculate how dense the surrounding gas giant is, and thus understand the environment of the star before it died," he said.

The research was published in the journal the Monthly Notices of the Royal Astronomical Society.