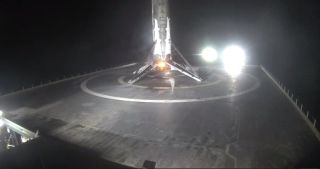 The first stage of SpaceX's Falcon 9 rocket rests on the deck of a robotic ship called "Of Course I Still Love," seconds after touching down on Aug. 14, 2016.
(Image: © SpaceX)

SpaceX has done it again.

The private spaceflight company landed its Falcon 9 rocket for the sixth time in the last eight months early Sunday morning (Aug. 14), pulling off the feat during the successful launch of the JCSAT-16 commercial communications satellite.

Less than 9 minutes later, the rocket's first stage came back for a pinpoint landing on the deck of a robotic ship called Of Course I Still Love You, which was stationed in the Atlantic Ocean a few hundred miles off the Florida coast.

A textbook touchdown had been anything but guaranteed.

"Given this mission’s GTO destination, the first stage will be subject to extreme velocities and re-entry heating, making a successful landing challenging," SpaceX representatives wrote in a pre-launch JCSAT-16 press kit.

SpaceX first landed a Falcon 9 in December, during the launch of 11 satellites for the company Orbcomm. The company scored four more successes, along with three failures, through July; Sunday's touchdown marked success number six.

These attempts are part of SpaceX's effort to develop fully and rapidly reusable rockets. Such technology could eventually cut the cost of spaceflight by a factor of 100, helping spur humanity's spread out into the solar system, according to company founder and CEO Elon Musk. (Musk has said repeatedly that he started SpaceX back in 2002 primarily to help humanity colonize Mars.)

Four of the Falcon 9 landings have occurred on the "drone ship," while the other two came down on terra firma, back at Cape Canaveral. The touchdown destination depends on the mission profile: Rockets that blast payloads toward distant destinations like GTO cannot carry enough fuel to make it all the way back to the launch site, so the ship is the only option, SpaceX representatives have said.

SpaceX has yet to re-fly any of the landed Falcon 9 first stages, but that milestone could happen as early as this autumn, Musk has said.

SpaceX's rocket landings, while dramatic, have all been secondary objectives; the main goal of each mission has always been to get the payload to orbit. That was no different Sunday morning, as SpaceX was chiefly concerned with sending JCSAT-16 on its way.

The spacecraft was built by Space Systems Loral and will be used as an in-orbit backup by Sky Perfect JSAT Corp., a Tokyo-based satellite-communications provider.

SpaceX launched the JCSAT-14 satellite this past May, a liftoff that also featured a successful landing at sea.