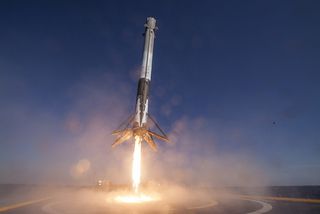 The first stage of SpaceX's Falcon 9 rocket lands on the deck of the robotic ship "Of Course I Still Love You" on April 8, 2016.
(Image: © SpaceX)

SpaceX will attempt another rocket landing during the launch of a commercial communications satellite early Sunday morning (Aug. 14), and you can watch all the dramatic action live.

SpaceX's two-stage Falcon 9 rocket is scheduled to launch the JCSAT-16 satellite at 1:26 a.m. EDT (0526 GMT) Sunday from Cape Canaveral Air Force Station in Florida. About 9 minutes later, the rocket's first stage will attempt a soft landing on a robotic "drone ship" in the Atlantic Ocean, a few hundred miles off the Florida coast. You can watch it all live here at Space.com, courtesy of SpaceX.

You can also watch the liftoff and landing attempt live directly via SpaceX, at http://www.spacex.com/webcast or https://www.youtube.com/watch?v=QZTCEO0gvLo.

The touchdown try — a secondary objective Sunday, behind the main goal of lofting JCSAT-16 — is part of SpaceX's effort to develop fully reusable rockets, a cost-slashing innovation that company founder and CEO Elon Musk views as essential to speeding humanity's spread out into the solar system.

SpaceX has already landed five Falcon 9 first stages, with the latest success coming last month during the launch of the company's robotic Dragon cargo capsule to the International Space Station on a resupply mission for NASA.

Some of these touchdowns have occurred on land, while others employ the drone ship; it depends on the destination of the Falcon 9's payload. (Rockets that blast satellites toward distant orbits cannot carry enough fuel to make it all the way back to the launch pad. JCSAT-16 is headed toward a final orbit that's about 22,300 miles, or 35,800 kilometers, above Earth.)

The first relaunch of a landed Falcon 9 first stage could come as soon as this fall, Musk has said.

SpaceX launched the JCSAT-14 spacecraft in May — a mission that also featured a successful Falcon 9 first-stage landing.