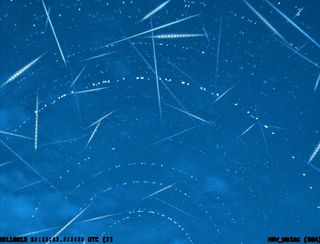 Here's what to expect from US weather for the Perseid meteor shower, which peaks overnight tonight (Aug. 11-12).

If you're hoping to get a good view tonight, the best weather prospects favor the western U.S., most notably anywhere west of a line extending from roughly International Falls, Minnesota, southwest to El Paso, Texas. Skies are expected to be partly cloudy to clear during the late-night hours of Thursday night into Friday, thanks chiefly to a zone of high pressure spread out over the central Rockies. This promises a good view of this year's Perseid performance in that region.

The exception will be near and along the northern and central California coast, where low clouds and fog — the marine layer — will move in from the Pacific and spoil the view, but anyone taking a short drive inland should find clearer skies. [Perseid Meteor Shower 2016: When, Where & How to See It]

Meanwhile, in a zone stretching from the upper Great Lakes down through Minnesota, Iowa, Nebraska, Kansas and through the Texas-Oklahoma panhandle, the weather will be problematic. Two low-pressure systems — one centered near Duluth, Minnesota, and the other near Omaha, Nebraska — and an associated frontal line stretched across the central and southern plains will team up to bring extensive cloud cover as well widespread showers and scattered thunderstorms.

Across Kansas, Nebraska and Iowa, some of the storms could be strong to severe, possibly delivering excessive amounts of rain. Put simply, the only meteors to be seen in this viewing zone will be those of the "hydro" variety.

As for the rest of the central and eastern U.S., the weather will be dominated by a large "Bermuda High," a high-pressure weather pattern off the middle-Atlantic coast, producing a large area of hazy, hot and oppressively humid weather. Generally speaking, skies should be no worse than partly cloudy for Perseid viewing, but local weather disturbances interacting with such a humid air mass can produce clouds, showers and thunderstorms. One such disturbance is expected to adversely affect the weather near the central Gulf Coast, perhaps causing showers or heavy rain for parts of Louisiana, Mississippi and Alabama.

Minor weather disturbances over parts of the Ohio Valley, heading east to the New York City area, could generate unwelcome cloud cover late Thursday night. A nearly stationary weather front draped across southern parts of Ontario and Quebec, and stretching east to northern Maine, might also throw a few unwanted clouds between the Perseids and skywatchers.

Another factor that makes the Perseids popular is that the temperatures are generally comfortable: 50s and 60s Fahrenheit (10 to 20 degrees Celsius) across most of the western states (except 40s F, or4 to 10 degrees C, over the high elevations of the Rockies) and balmy 70s F (20 to 26 degrees C) over much of the eastern U.S., as well as the desert Southwest and Southern California.

You can get the latest forecast for your local area here, where you'll find links to all of the National Weather Service Forecast Offices around the country. Just locate the region that you are in for the office that serves your area.

Generally, it is thought that showers like the Perseids are the debris of comets, while larger meteors that make it to Earth as meteorites are made of the same stuff as asteroids — possibly fragmented planet material. The Perseids appear white or yellowish in the sky, numerous and bright, with some fireballs and glowing trains.

At the shower's peak tonight, these meteors appear to diverge from a small area in the northern part of the constellation Perseus (hence the name, "Perseid"). This is so far north that it's above the horizon for most of the country when darkness falls. Hence, you might sight a Perseid or two during the evening hours. But only after midnight, when the radiant is high in the northeast sky and observers have been turned by the Earth onto the planet's forward-moving side, do the numbers really begin to increase to the one-per-minute rate (or more) that makes this shower so exciting. [Perseid Meteor Shower Explained - Most Active of the Year! (Video)]

In the eastern U.S., observers should pay close attention for a possible brief surge of meteor activity around 1 a.m. EDT; Earth will be interacting with a localized "clump" of dusty debris shed during the 11th century by Comet Swift-Tuttle, the progenitor of the Perseid meteoroids.

I have always found that it helps to have had a late-afternoon nap and a shower, and to wear fresh clothing before going out to watch a meteor shower. Expect the temperature to be below what your local forecast suggests. When you sit quite still, close to the rapidly cooling ground, and the air is damp, you can become very chilled. Long lawn chairs, heavy blankets, sleeping bags, ground cloths, auto cushions and pillows are essential equipment. Some food or drink will also help keep you comfortable.

Good luck and enjoy the show!