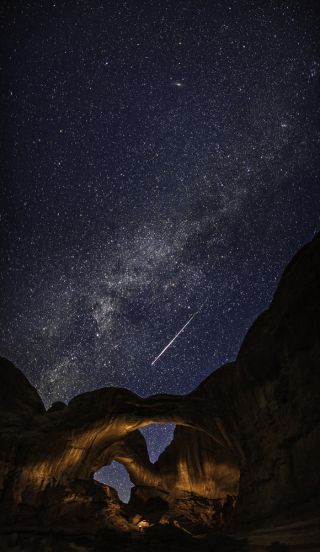 Always spectacular, the Perseid meteor shower may reach as many as 200 meteors per hour during its 2016 peak Aug. 11-12. Here, photographer Thomas O'Brien caught a meteor streaking across the sky above Arches National Park, Utah, during the annual Perseid shower. He used an artificial light source to illuminate and emphasize the dramatic rock formations.
(Image: © Thomas O'Brien)

The 2016 Perseid meteor shower will peak late tonight, and if you can't watch it in person, a plethora of live webcasts have you covered.

Earth has been passing through the trail of Comet Swift-Tuttle for the past few weeks, and will reach the heart of the debris — causing a peak rate of meteors burning up in Earth's atmosphere — overnight tonight, Aug. 11-12.

If you're in the Northern Hemisphere, head outside after the moon sets (around 12-1 a.m. depending on your location) for the ultimate shooting-star views. But if you're in for a cloudy, rainy night, live somewhere with too much light pollution or just want to head in early for the night, there are lots of live webcasts to tune in to and still experience the shower. [Perseid Meteor Shower 2016: When, Where & How to See It]

Slooh Community Observatory will host a marathon 4-hour-long broadcast starting tonight at 8 p.m. EDT (0000 GMT on Aug. 12), which you can watch live on the Slooh website. The webcast will incorporate live views of the meteors from observatories in four different countries: Spain's Canary Islands; Washington, Connecticut in the United States; the United Kingdom; and Canada's Thunder Bay.

You can also watch the Perseids meteor shower webcast on Space.com, courtesy of Slooh. The observatory will also discuss the best ways to watch, how to catch meteor photos and the history behind the constellation Perseus, the shower itself and Comet Swift-Tuttle.

Tomorrow, starting at 9 p.m. EDT (1300 GMT), Slooh will continue to cover the Perseids with the help of Weathernews Japan.

"With December's Geminids spoiled by a full moon, these Perseids will be the best shower of 2016," Slooh host Bob Berman said in a statement. "Add to that the juicy peril of its parent comet, Swift-Tuttle, the most hazardous object in the known universe, and you have all the ingredients for a 4-star spectacle."

NASA will host its own live webcasts starting at 10 p.m. EDT both tonight and Friday (0200 GMT Friday and Saturday) for any space enthusiasts with obstructed views.

Because the Perseids are in outburst this year, there might be as many as 200 meteors per hour streaking across the sky tonight. So whether you plan to watch outside late tonight or follow a live webcast, get ready: It's going to be quite a show.