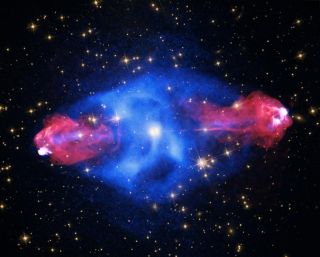 The galaxy Cygnus A, which played a prominent role in Carl Sagan's 1985 novel "Contact," is shown here in multiple wavelengths, including X-ray, radio and visible. A new study looks at the powerful magnetic fields produced by jets spewing out of the monster black hole at the galaxy's center.
(Image: © X-ray image: NASA/CXC/SAO; visible light image: NASA/STScI; radio waves image: NSF/NRAO/AUI/VLA.)

Cygnus A, an elliptical galaxy located about 600 million light-years from Earth, is one of the brightest sources of radio waves in the night sky. The prominent galaxy took center stage in renowned astronomer Carl Sagan's 1985 science-fiction novel "Contact."

Now, thanks to the CanariCam instrument on the Gran Telescopio Canarias — a giant telescope in Spain's Canary Islands — scientists have new information about the monster black hole at the heart of this famous galaxy, and the powerful magnetic fields it produces.

The astronomers took advantage of CanariCam's polarimetric capability — which measures the polarization, or orientation, of light waves — as well as its ability to see infrared light, to peek at the supermassive black hole at the center of Cygnus A, according to a statement from the Astrophysics Institute of the Canaries (IAC). [Images: Black Holes of the Universe]

The galaxy is what's known as an active galactic nucleus (AGN), meaning the black hole is sucking in material from its surroundings and emitting high levels of light. It's also shooting out large jets of particles at nearly the speed of light that travel beyond the edge of the galaxy.

Detecting the polarization of the light waves lets scientists ignore all of the light that is not affected by the magnetic field in the galactic nucleus, meaning they can filter out background sources, including stars and other light sources from the galaxy itself, according to the statement.

"This gives us a much higher contrast when we observe the jets and the dust in the galaxy, while studying the influence of the magnetic field on both of them," Enrique López Rodríguez, a researcher at the University of Texas at Austin and the first author of the new study, said in the statement.

Previously, scientists had difficulty seeing through the cloud of interstellar dust that surrounds Cygnus A because visible light cannot penetrate it. CanariCam, however, can observe light in the middle infrared wavelength range, which is not blocked by interstellar dust, according to the statement.

With both the ability to see infrared light and the polarization of the waves, López Rodríguez and his team found that the plasma emitted from the active nucleus spirals around the magnetic field of the jets of matter that shoot out from the center of the galaxy toward its edges. The spiraling of this plasma creates "synchrotron radiation," a process wherein light is produced by the acceleration of electrons by a magnetic field, according to the statement.

Scientists say detecting synchrotron radiation in the middle infrared wavelength confirms that the charged gas in the jets emitted by Cygnus A is "highly confined by the effect of the magnetic field" around the black hole, according to the statement. Essentially, the finding gives scientists a better look at the magnetic field inside this extremely bright, active region. Astronomers hope that this new information will help them understand what causes activity in supermassive black holes like the one at the center of Cygnus A.