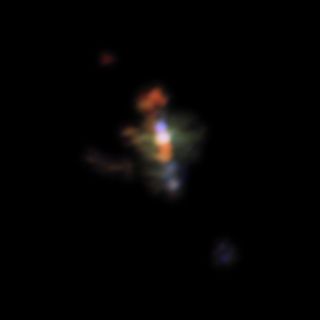 A close-up of the center of galaxy NGC 1377 taken by the ALMA telescope. Reddish gases are moving away from Earth, and blue are moving toward it, relative to the galaxy's center.
(Image: © ALMA/ESO/NRAO/S. Aalto & F. Costagliola)

The largest black holes are sloppy eaters. As they gobble up the gas and dust around them, some material falls to the wayside, and is ejected by gravity as hot jets of material.

But the black hole at the center of galaxy NGC 1377 is an unusual eater because it boasts a surprisingly cool spout.

While hot plasma jets from black holes shine brightly at radio wavelengths, lighting up their host galaxies, "NGC 1377 is one of the most radio-faint galaxies known," Susanne Aalto, a professor of radio astronomy at Chalmers University of Technology in Sweden and lead author on the new research, told Space.com by email. This kind of "dark jet" has never been seen before in a galaxy, according to Aalto, and could provide insight into how these monsters feed and grow. [Images: Black Holes of the Universe]

While black holes come in all sizes, the largest can pack the mass of more than a billion suns. These supermassive black holes lie at the center of most galaxies, including the Milky Way. But scientists aren't quite sure how the behemoths grow to such gigantic proportions.

Jets spouting from large black holes are sure signs that the black hole is gathering, or accreting, material, and if the jet is hot, it implies that hot gas is also falling into the black hole.

Conversely, NGC 1377's cool, dark jet suggests that perhaps the black hole is gobbling down cool gas, which is more efficient for black-hole growth than hot gas, Aalto said. When a black hole consumes cold material, less goes to waste. As a result, the black hole can grow at a faster rate than a similar object feeding on a hot meal.

But both Aalto and co-author Francesco Costagliola, a researcher at Chalmers, warned that the cool jet doesn't necessarily mean a cool diet for the behemoth.

"We think it is accreting cold gas because the accretion seems to be very efficient, which one would not expect if it was accreting hot plasma," Costagliola said. "[But] the fact that we see cold molecular gas in the jet may have nothing to do with the kind of material the supermassive black hole is accreting."

Other observations made by the team suggest that the black hole is young and still growing, and is in what astronomers call a transient stage. Transient stages can be difficult to spot, because they are so short in relation to the billions of years of a black hole's lifetime, the researchers said. If the gas that other juveniles consume while they are young is cold rather than hot, it could help explain how they grow so large.

The unusual jet is also rotating, presenting another challenge to researchers trying to understand it. The circular motion could come from an uneven flow of gas into the black hole, or it could be the result of a second black hole that is growing closer to the first.

In a related paper currently in preparation for publication, Costagliola and his colleagues analyzed the galaxy's radio emission in greater depths. The team has also been awarded time with the Very Large Array and NASA's Hubble Space Telescope to study other aspects of the black hole and its galaxy, in the hopes of understanding more about how the young black hole and others like it become heavyweight champions.

"Maybe this fall we will be able to solve the mystery of the jet in NGC 1377," Costagliola said.

The results were published in the journal Astronomy and Astrophysics.