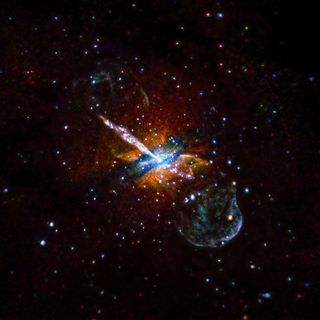 A powerful jet shooting from a supermassive black hole at the center of a distant galaxy shines in a newly released image and video tour.

NASA's Chandra X-ray Observatory gathered data that was used to create the new photo of the galaxy Centaurus A — which is located about 12 million light-years from Earth. The space-based observatory collected the data from 1999 to 2012, but the space agency released the photo on Feb. 6. You also can take a full video tour of the Centarus A photo.

While the black hole jet is a prominent feature, the picture also shows what scientists think to be the leftovers of a collision between Centaurus A (Cen A for short) and a smaller galaxy millions of years ago. The "dust lane" that wraps around the middle of Cen A could be the remains of the incorporated galaxy, NASA officials said in the video. [See more amazing photos of the X-ray universe seen by Chandra]

The Chandra X-ray Observatory has been observing Cen A since 1999, just after the space telescope came online. Scientists have found that point-like X-ray sources in Cen A fall into two groups. The X-ray sources come from a system where either a black hole or neutron star is siphoning gas from a companion star, NASA officials said.

"These compact objects form by the collapse of massive stars, with black holes resulting from heavier stars than neutron stars," NASA officials said. "The results suggested that nearly all of the compact objects [neutron stars or black holes] had masses that fell into two categories: either less than twice that of the sun, or more than five times as massive as the sun. These two groups correspond to neutron stars and black hole."