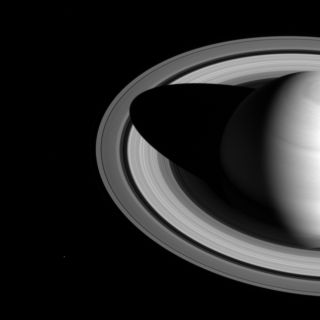 The shadow of Saturn cast across the planet's massive ring system, captured by the Cassini probe on May 21, 2016.
(Image: © NASA/JPL-Caltech/Space Science Institute)

On Earth, the change of the seasons can be marked by the length of the shadows cast by the sun. This approach also works on Saturn, where the shadow of the massive planet grows shorter each day.

A new photo from the Cassini probe shows the shadow of Saturn blanketing a large section of the planet's ring system. But back in 2007, Cassini images showed Saturn's shadow stretching well beyond the edge of the rings. The shortening of the planet's shadow will continue as Saturn approaches a solstice in May 2017.

Saturn experiences a change of seasons for the same reason Earth does: The ringed world's axis of rotation is slightly tilted compared to its orbital path around the sun. While the northern hemisphere tilts toward the sun, the southern hemisphere points away.

When Saturn reaches its northern hemisphere solstice, the shadow of the planet will fall at about the middle of the B ring (which is the bright section of rings that border the large gap in the ring system), according to NASA.

The moon Mimas, which bears a striking resemblance to the Death Star from "Star Wars," also snuck into the new photo, which was taken on May 21 and released today (Aug. 8). The small moon (one of 62 that are known to orbit Saturn) is only a few pixels wide, in the lower left of the image. The picture was taken at about 2 million miles (3.2 million kilometers) from Saturn, and the image scale is about 120 miles (190 km) per pixel.

Cassini has spent 12 years studying the Saturn system, but the probe's days are numbered. Starting late this year, Cassini will zip through the space between Saturn and its rings, making a total of 22 passes and gathering new data about the system. In September 2017, the probe will end its mission by intentionally diving into Saturn, collecting new information on the way down.