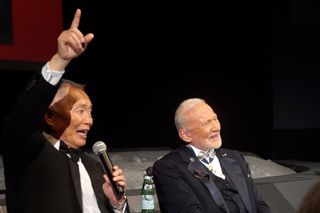 An audience of some 250 people took part in the evening event, which was dominated by a huge Saturn 5 moon rocket perched overhead. The occasion raised funds for Apollo 11 astronaut Buzz Aldrin's ShareSpace Foundation, a nonprofit organization dedicated to inspiring children to be passionate about science, technology, engineering, the arts and math.

The anniversary gala was hosted by George Takei, best known for his portrayal of Mr. Sulu in the original "Star Trek" TV series and movies. [The Evolution of 'Star Trek' (Infographic)]

Peering out into the audience, Takei spotlighted the 363-foot-tall (111 meters) Saturn 5 booster, calling it an "amazing, amazing rocket." But he was quick to remind Aldrin that the famous "Star Trek" spaceship USS Enterprise was far bigger — and far speedier, with the ability to reach warp speed 9.

Continuing the comparison, Takei noted that Apollo 11 crewmates Neil Armstrong, Aldrin and Michael Collins visited just one heavenly body, adding: "You know how many we landed on? We sparkled and popped out and beamed down on hundreds of planets."

Takei went on to explain that "science fiction and reality really are partners," and that it took an extraordinary artist, storyteller, imagineer and producer — Gene Roddenberry — to create "Star Trek."

"Gene imagined the unimaginable … he imagined a metaphor ... he said the Starship Enterprise was a metaphor for starship Earth," Takei said. "He populated it with people of the spirit. The strength of this starship lay in its diversity … people of different backgrounds, cultures, ethnicities, histories, orientations and faiths … all coming together to work as a team and working in concert. That's what makes it possible to get out there."

Takei recalled that 1966 was a year of two launches — that of "Star Trek" and the uncrewed, suborbital Apollo-Saturn 201 mission, which tested the Saturn 1B rocket and the Apollo command and service modules.

There was also some symmetry in 1969, Takei noted: The iconic Apollo 11 landing occurred the same year that the "Star Trek" TV series was canceled.

The science fiction of today is going to be made real by young people, Takei said.

"Our horizon is now out in space," he said. "It's a much bigger — a far more vast — area of curiosity that we have."

The goal is actually to boldly go where no one has gone before, Takei said — "to ensure that our engineers and scientists will be as boldly imaginative and creative and inventive as Gene Roddenberry was … to ensure that we all, our civilization, lives long and prospers."

Takei had a special surprise video beamed in from one of his "Star Trek" crewmates — William Shatner, who played USS Enterprise Capt. James T. Kirk.

Shatner said he wished he could be present at the Apollo 11 anniversary event. He was in Los Angeles, tied to a previous engagement with the other starship captains of "Star Trek" celebrating the past 50 years, Shatner said.

"That's a conundrum," he said. "Does that mean I was in space before Buzz?"

Shatner congratulated Aldrin on the first moon landing. "It inspired me," Shatner said, "and hundreds of millions of all the people on Earth."

In closing, Shatner said, the Apollo 11 landing "reminds us that peaceful cooperation is possible in this world…to boldly go…on to Mars!"

Leonard David is author of “Mars: Our Future on the Red Planet,” to be published by National Geographic this October. The book is a companion to the National Geographic Channel six-part series coming in November. A longtime writer for Space.com, David has been reporting on the space industry for more than five decades. Follow us @Spacedotcom, Facebook or Google+. Originally published on Space.com.