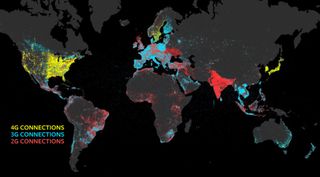 Facebook's Aquila high-altitude, unmanned, solar-powered plane conducted its first full-scale flight on June 28. Facebook said it was a success but that there is a long road ahead before the Aquila program can begin commercial Internet delivery to the world's unconnected populations. Here's Facebooks assessment, as of February 2016, of connectivity levels worldwide.
(Image: © Facebook)

PARIS – Facebook on July 21 said the first flight of its full-scale Aquila solar-powered aircraft designed for regional internet connectivity was a success, lasting longer than expected despite an unspecified "structural failure" just before landing.

The 96-minute flight, conducted in Yuma, Arizona, confirmed the validity of Aquila's structural design and avionics, Facebook said. But the company cautioned that many months of testing — at higher speeds and altitudes, and for longer durations — would be necessary before Aquila can move into industrial-scale production.

"We will push Aquila to the limits in a lengthy series of tests in the coming months and years," Jay Parikh, Facebook's global head of engineering and infrastructure, said in a statement published July 21 — more than three weeks after the June 28 flight. He said the structural failure, which he did not detail, was still be analyzed.

The company said developments in battery technology will be key to enable future Aquila craft to remain in service, without interruption, for several months at a time even during low-sunlight-exposure periods during winter.

With a wingspan greater than a Boeing 737's average 35 meters in length, Aquila is designed to stay aloft, at more than 60,000 feet in altitude, for three months, delivering high-speed Internet connectivity to a 100-kilometer-diameter region. Facebook is investigating both laser and millimeter-wave signal-delivery systems.

Aquila's optimal speed is around 130 kilometers per hour for a three-month service flight. Facebook said unmanned aircraft ultimately should be less expensive to deliver to a given population than fiber or microwave links.

Its solar-powered motors, avionics and Internet delivery gear will operate on five kilowatts of power. Facebook said it's likely that the batteries alone will account for around 50 percent of Aquila's total liftoff weight.

Facebook, like Google, has been studying a range of Internet-delivery technologies including balloons, high-altitude drones and satellites. Facebook has leased, with satellite fleet operator Eutelsat of Paris, a portion of the Ka-band payload on Israel-based fleet operator Spacecom's Amos 6 satellite, scheduled to launch in late August aboard a SpaceX Falcon 9 rocket. The satellite will deliver Internet to 14 nations in sub-Saharan Africa.

So far, Facebook has not committed to a larger satellite, which Eutelsat has ordered, to expand the service.

For the June 28 flight, Aquila was placed onto a dolly and attached with four straps and then pulled by a truck along a runway until it reached requisite takeoff speed, at which time the straps were cut with pyrotechnic squibs.