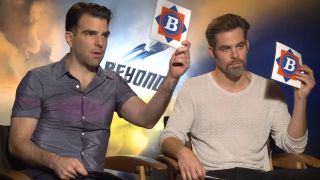 Capt. James T. Kirk may have been able to pass the Kobayashi Maru exam while training at Starfleet Academy, but trivia questions give him a run for his money in this new Q&A with NASA.

With the release of "Star Trek Beyond," which premieres today (July 22), the Enterprise's Capt. Kirk (Chris Pine) and Cmdr. Spock (Zachary Quinto) sat down with Gay Yee Hill of NASA's Jet Propulsion Laboratory for a multiple-choice quiz on NASA history and space terminology.

The two were off to a good start when they both correctly answered what the first "A" in NASA stands for ("aeronautics"), but Pine's winning streak did not last long. Although he was able to define an exoplanet — a planet that orbits a star outside our solar system — when asked what NASA's first space shuttle was, he incorrectly answered Discovery. The correct answer is the Enterprise, a test orbiter built in the 1970s that never made it to space. The first shuttle to actually launch to space was Columbia, or STS-1, which blasted off from Kennedy Space Center in 1981. After 12 questions, Quinto came out on top, with an almost perfect score. ['Star Trek Beyond' in Photos (Gallery)]

Since the original TV series premiered in 1966, the "Star Trek" franchise and NASA have crossed paths on several occasions, including when NASA's satellite Galileo made an appearance in the "Star Trek" films. The large spaceships featured in the TV series venturing into deep space may have inspired NASA missions, as well as NASA's first space shuttle, the test orbiter Enterprise.