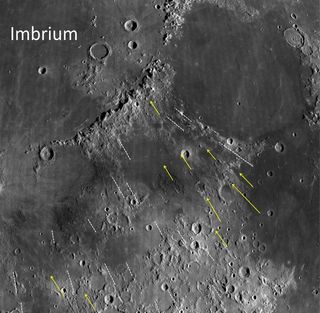 Grooves and gashes associated with the Imbrium Basin on the moon have long been puzzling. New research suggests some of these features were formed after a protoplanet slammed into the moon long ago.
(Image: © NASA/Northeast Planetary Data Center/Brown University)

A baby planet at least as large as New Jersey that smashed into the moon billions of years ago might have created the mysterious grooves that score the lunar surface, a new study suggests.

This finding could shed light on a violent era of impacts that once bombarded Earth and the rest of the inner solar system, researchers said.

Scientists investigated the area surrounding Mare Imbrium — Latin for "The Sea of Showers." This dark patch on the northwest quadrant on the near side of moon, the side that faces Earth, makes up the right eye of the "Man in the Moon." [The Moon: 10 Surprising Lunar Facts]

Mare Imbrium lies within the Imbrium Basin, the largest basin on the near side of moon. Previous research suggested that the 720-mile-wide (1,160 kilometers) basin was created by a giant ancient cosmic impact, and was later filled with vast lakes of lava that cooled to become dark rock.

Mare Imbrium is surrounded by grooves and gashes large enough to be seen from Earth even with small telescopes. These features, together known as the Imbrium Sculpture, are concentrated on Imbrium Basin's southeast side.

Many elements of the Imbrium Sculpture radiate from the center of Imbrium Basin like spokes on a wheel. Previous research had suggested that the Imbrium Basin and Imbrium Sculpture were created by a giant asteroid impact about 3.8 billion years ago. This asteroid was apparently traveling from the northwest to the southeast and collided with the moon at an oblique angle rather than straight on, with debris spraying southeast along this trajectory.

However, in addition to features radiating from Imbrium Basin's center, prior work discovered another set of grooves in the Imbrium Sculpture that did not spread out from the heart of the basin. Instead, they apparently came from a region northwest of the basin's center.

"This second set of grooves was a real mystery," study lead author Peter Schultz, an impact specialist at Brown University in Providence, Rhode Island, said in a statement. "No one was quite sure where they came from."

But Schultz and co-author David Crawford, of Sandia National Laboratories in Albuquerque, New Mexico,  may have solved the mystery. Their results suggest that the Imbrium Basin and Imbrium Sculpture were likely formed by a giant asteroid large enough to be classified as a protoplanet, or baby planet.

To learn more about the impact that might have created the Imbrium, Schultz and Crawford performed hypervelocity-impact experiments using the Vertical Gun Range at NASA's Ames Research Center in Mountain View, California. These experiments involved a 14-foot (4.25 meters) cannon that fired small bullets at up to about 11,200 mph (18,000 km/h), while high-speed cameras and impact plates recorded details about the collisions.

The researchers suggest that the mystery grooves of the Imbrium Sculpture were etched by chunks that sheared off the sides and top of the impacting asteroid when it hit the moon.

"For Imbrium, as much as 25 percent of the asteroid may have detached from the actual collision," Schultz told Space.com. "Some of the fragments actually escaped the moon entirely."

Computer models analyzing these grooves helped the scientists estimate the size of this "Imbrium Asteroid." Previous estimates suggested that the Imbrium Asteroid was only about 50 miles (80 km) wide. But these new findings suggest that the impactor was actually about 150 miles (250 km) across, or about the length of New Jersey.

"That's actually a low-end estimate," Schultz said in a statement. "It's possible that it could have been as large as 300 kilometers [185 miles]."

All in all, the researchers suggest that protoplanets may have once been common in the asteroid belt. "The large basins we see on the moon and elsewhere are the record of lost giants," Schultz said in a statement.

Material from protoplanets smashing into the moon could help explain why lunar samples that NASA's Apollo missions brought back to Earth had high levels of meteoritic rock. This was especially true of the Apollo 16 mission, which landed downrange from the Imbrium impact.

The scientists added that collisions with these protoplanets might explain many of the impacts that battered the moon and the rest of the inner solar system during a violent era known as the Late Heavy Bombardment between 4.1 billion and 3.7 billion years ago. Thousands of chunks that sheared off the Imbrium Asteroid and other protoplanets would have kept going after impact, flying off into space to continue striking other bodies.

"These chips off the old blocks could have contributed significantly to the impact record we see on the moon and other terrestrial planets," Schultz said in a statement.

Schultz and Crawford detailed their findings online today (July 20) in the journal Nature.