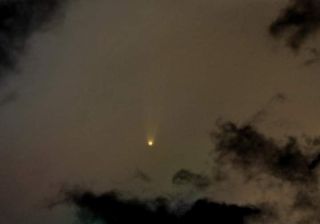 Michael Jager and Gerald Rhemann photographed comet C/2006 P1 (McNaught) from Austria in twilight 45 minutes before sunrise on Jan. 3. Rhemann told SPACE.com they used 7x50 binoculars to find the comet. They estimate that today (Jan. 5) it shone at magnitude +1 and they expect to see it with the naked eye next week. Image used with permission.

Comet McNaught, the brightest comet to appear in our skies in more than 30 years, has been putting on a spectacular show in the eastern sky at dawn and the western sky at dusk this week.

And this weekend it might become even more brilliant.

Ironically, the comet has also been a source of frustration for many skywatchers, because of its very low altitude.  More often than not, the comet has been hidden either by clouds near the horizon, or nearby trees or buildings.  For this reason, even some veteran observers have been stymied in their efforts to catch a glimpse of it.

But Comet McNaught is now also visible to armchair astronomers via images posted to the Internet from the Solar and Heliospheric Observatory (SOHO) spacecraft.  And beginning next week, it will head rapidly south and likely become a spectacle for skywatchers in the Southern Hemisphere.

McNaught discovered this comet when it was a few degrees east of the "head" of Scorpius, on CCD images obtained with the observatory's Uppsala Schmidt telescope.  The images had been obtained as part of the Siding Spring Survey, whose mission is to contribute to the inventory of potentially hazardous asteroids (PHAs) and comets (PHOs) that may pose a threat of impact and thus harm to civilization.

McNaught described the comet-the 31st to bear his name-as magnitude 17.3-or about 25,000 times dimmer than the faintest object that human eyes can perceive without any optical aid.

When Brian Marsden at the Smithsonian Observatory in Cambridge, Massachusetts first calculated the orbit of Comet McNaught (now catalogued as C/2006 P1) on Aug. 8, it was based on only a handful of observations.  As a result, this first computation suggested that the comet would come closest to the Sun (called "perihelion") in June 2007, and then not get much closer than about 145 million miles (233 million kilometers), or about the distance of the planet Mars.

As more observations of the comet arrived, however, Marsden refined its orbit, and on Aug. 11, he announced that it was likely to pass well within the Earth's orbit-a distance of just 15.9 million miles (25.6 million kilometers)-today. That's well within the orbit of Mercury. This would make the comet much brighter than most, but as a caveat, also potentially hide it in the Sun's glare.

From August into early November the comet steadily increased in brightness, but not enough to prevent it becoming lost in the evening twilight by mid-November.

Although still brightening, it appeared that the comet could be totally lost from view until it reappeared for Southern Hemisphere observers in the evening twilight skies late in January.  In addition, there was the opinion of several respected amateur and professional astronomers that the comet would completely disintegrate around the time of perihelion.

The comet went unobserved for nearly six weeks but was successfully recovered in the twilight toward the end of December.

Since then the comet has continued to grow impressively in brightness. Just after the start of the New Year it was becoming clear that Comet McNaught could conceivably be a dazzling object when closest to the Sun in mid-January [story].  Indeed, as we pointed out in this column just a couple of years ago, we were due for a spectacular comet.

Observers around the Northern Hemisphere have reported the comet shining as brightly as magnitude -3.0 [images], or more than four times brighter than Sirius, the brightest star in the sky.

This places Comet McNaught near the top of the list of the brightest comets that have appeared since 1935 [list]. But the brightest part of the display may be yet to come.

Due to the proliferation of dust in the comet, it is anticipated that there will be a brightness enhancement caused by the comet being located between us and the Sun. This brightening, called "forward scatter," could increase the brightness of the comet by as much as two magnitudes, so an impressive-albeit short-lived-surge in brightness might result from January 13-16.

As such, Comet McNaught's brightness may possibly end up even rivaling the brilliant planet Venus, now currently visible in the early evening twilight sky.  In addition, there is also still the possibility-albeit small-that the comet could split apart or fragment into several pieces.  Such a scenario could also make Comet McNaught appear substantially brighter.

This weekend will also provide the last chance to catch a view of McNaught from much of the Northern Hemisphere.

But all of this will be a moot point if you can't find the comet because trees and buildings are in your way.  The prerequisite for getting a view of this spectacular comet is a very clear and completely unobstructed southwestern horizon.  Also, it's currently positioned very near to the Sun against a bright twilight sky, and setting very soon after sundown.

On Friday evening, it will be setting only about 40 minutes after the Sun; on Saturday evening less than 30 minutes and by Sunday evening, just about 10 minutes.  Unless the comet becomes superbrilliant by then, it may be masked by the solar glare.

Certainly though, you should try for it on Friday and Saturday, as it can definitely be seen as a "speck" of light with the unaided eye.  Through binoculars or a small telescope it shines with a golden yellow color and displays a gently curving tail of dust pointing upward.

After this weekend, its motion southward in the sky will make it unobservable from places north of the equator.

See it with SOHO

Those who are stuck under cloud-filled skies-or skywatchers in the Southern Hemisphere who as yet cannot see the comet-can still watch for it using computers and accessing near-live images from the SOHO spacecraft.

Back in 2003 and again in 2004, the public was captivated when SOHO photographed two bright comets that-like McNaught- swept closely past the Sun. Hundreds of otherwise unknown comets have actually been first detected in SOHO imagery, generating a competition among a handful of armchair astronomers. Since it was launched in 1995, SOHO officials have reported more than 1,200 comet discoveries using the spacecraft's imagery.

Because it will appear to move rapidly southward after perihelion, Comet McNaught will quickly pass out of sight for viewers in the Northern Hemisphere, and ultimately emerging into the evening sky for observers south of the equator during the second half of January.

Beginning Jan. 14, southern skywatchers should concentrate on the west-southwest horizon soon after local sunset.  Of course, binoculars will certainly enhance the view of Comet McNaught, as well as any tail that will appear to protrude up from the horizon.  As it pulls out of the evening twilight, the comet and its lengthening dust tail should be well-developed and a striking sight indeed!  A special viewers guide for Southern Hemisphere observers, can be accessed here.

Unfortunately, the comet is expected to fade quickly as it recedes from both the Sun and Earth.

Trying to forecast the brightness of a new comet can always be hazardous, but the best "guesstimate" now suggests that by Jan. 21, McNaught's brightness may "relax" to around magnitude zero; perhaps third magnitude by month's end and down to fifth magnitude by early February.  On this astronomer's scale, larger numbers represent dimmer objects. The brightest objects are zero of first magnitude, with superbright objects such as Venus achieving negative magnitudes.

In a recent exchange emails, Robert McNaught revealed his feelings about his discovery.

"It is difficult for me to disentangle my passion for comets in general from the fact that I was the person to have accidentally found this specific one," McNaught told SPACE.com.

"I guess having my name attached to this comet must influence my excitement, but really, to be honest, it is largely an accident who finds them," he said. "Even more relevantly I am backed so expertly by an excellent team of guys at the University of Arizona who wrote the software that did the detection."

When asked if he has made people in his homeland of Australia aware that his spectacular namesake would soon be visible in their sky, McNaught said: I held off till I saw just how it was going to turn out. Nothing worse than a cold turkey.  They are just twigging to it now."