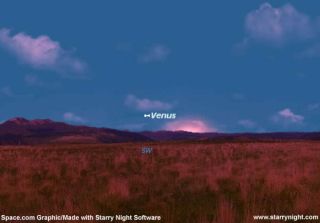 Venus on Dec. 15 around sunset from midnorthern latitudes.

Recently, I received an email from Ms. Julie Arkenstone of Northridge, California: "I've tried to find this info on the web and could not.  Would you please tell me when Venus becomes an evening star again?"

I could have answered Julie easily enough by simply saying: "Look to the southwest right after sunset; It's back!"

But this current evening apparition of Venus is going to evolve into an exceptionally good one, so let's get into a fuller explanation as to what is to come.

Venus passed superior conjunction (appearing to go behind the Sun as seen from Earth) back on Oct. 27. Since then, it has been mired deep in the brilliant glare of the Sun. Nonetheless, with each passing day, it has been moving on a slow course toward the east and pulling slowly away from the Sun's vicinity [sky map].

And during the first half of December, Venus started climbing up out of the sunset glow in earnest and has now returned to reclaim the role as the brilliant Evening Star, a title it has not held since the start of this year. Look for it now with binoculars shortly after sundown very low in the southwest.

When the month began, this planet was just a mere 4-degrees high in the southwest at sundown (your clinched fist held at arm's length is roughly 10-degrees wide).  At that time Venus touched the horizon about a half-hour after sunset. Only the most ambitious and skilled observers would have spotted the planet then.

During this next week, it should gradually become easier to see.  On the evening of Dec. 15, it sets about 20-degrees south of due west nearly 50 minutes after sunset, giving less experienced sky watchers a fighting chance to get their first glimpse. Continuing to swing east of the Sun during late December, Venus will soon become plainly visible in the western evening sky even to the most casual of observers.

Appearing as a brilliant silvery-white starlike object of magnitude -3.8, our sister planet will set just over an hour after the Sun by Christmas Day and this will have improved to more than 70 minutes by New Year's Eve.

But it is during the first seven months of 2007 that Venus will perform like an actress starring each evening in a brilliant evening performance. Viewed in the western twilight, this planet always appears dazzlingly bright to the unaided eye, and more so in binoculars. It will slowly rise higher each evening and will continue to grow in prominence all during the winter and on into the spring.

By April it will also start becoming increasingly evident that the planet is making an unusual excursion into the deep-night sky, setting more than three and a half hours after the Sun from late April through late May.

Some astronomy books will tell you that it's impossible to see Venus in the middle of the night. So it will be hard to believe that Venus can stay up as late as it will during the third week of May, when it will be setting at 11:45 p.m. local daylight time.  This will be after midnight for observers stationed in cities like Pittsburgh, Raleigh, Dallas and Salt Lake City.  And in the most extreme cases, it could be around 12:30 a.m. on daylight saving clocks in those cities that are far to the west of their standard time meridians!

Venus reaches its greatest elongation - its greatest angular distance - 45 degrees to the east of the Sun on June 8. It is brightest in early summer as it heads back down toward the Sun, reaching its greatest brilliancy for this apparition on the evening of July 12th at magnitude -4.3.  The planet will be most striking then; shining almost twice as bright as it does now.  But with this final burst of glory, Venus will quickly fade, sliding back into the solar glare and vanishing from our view at the start of August.

Between now and the beginning of August 2007, repeated observation of Venus with a small telescope will show the complete range of its phases and disk sizes.

Currently, the planet appears practically full (98-percent sunlit on Dec. 15), and through the upcoming winter season will display nothing more than a tiny, dazzling gibbous disk.  It will become noticeably less gibbous by the end of March.

In early June, Venus reaches dichotomy (displaying a "half moon" shape).  Then, during July, it shows us a large crescent as it swings near the Earth.  Indeed, those using telescopes will note that while the Earth-Venus distance is lessening, the apparent size of Venus' disk will grow, doubling from its present size by May 28th.  When it has doubled again in size on July 16, its large crescent shape should be easily discernable even in steadily held 7-power binoculars.

But even after it passes inferior conjunction on Aug. 18, the Venus show will not be over, for it dramatically reemerges as a dazzling "morning star" low in the southeast sky by month's end.  Then, a repeat performance will begin in September, with the above sequence of events reversed.  It continues right through to the end of 2007.  Indeed, 2007 will be Venus' year!