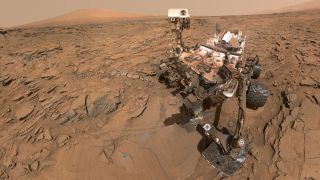 NASA's Mars rover Curiosity went into a precautionary "safe mode" over the Fourth of July weekend, but the robot is currently stable and communicating with its handlers back on Earth, space agency officials said.

Curiosity put itself into the minimal-activity safe mode on Saturday (July 2), for reasons that engineers are still trying to tease out.

The car-size Curiosity has entered safe mode three times before — all in 2013 — and bounced back fully every time.

Curiosity landed inside Mars' 96-mile-wide (154 kilometers) Gale Crater in August 2012, kicking off a $2.5 billion mission to determine if the area could ever have supported microbial life. The six-wheeled robot's observations have revealed that Gale Crater hosted a long-lasting, potentially habitable lake-and-stream system in the ancient past.

In September 2014, Curiosity reached the base of the 3-mile-high (5 km) Mount Sharp, which rises from Gale Crater's center. Ever since, the rover has been exploring the mountain's base, reading the rock layers for clues about Mars' environmental history.

The Curiosity team wants the robot to climb high enough up Mount Sharp's foothills to help scientists learn about the big climatic shift that transformed Mars from a relatively warm and wet world billions of years ago to the cold, dry planet it is today.

Curiosity should be able to accomplish this goal, provided it stays healthy. Last week, NASA announced that it had approved a two-year mission extension for Curiosity (and many other missions, including the New Horizons Pluto spacecraft), meaning the rover can continue studying the rock layers of Mount Sharp's lower reaches through late 2018.