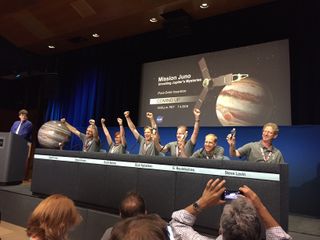 PASADENA, California — First came the sighs of relief, and then the shouts of joy.

The people behind NASA's Juno mission rode a wave of emotions Monday night (July 4) as the spacecraft approached Jupiter and then, after a picture-perfect, 35-minute engine burn, became just the second probe ever to enter orbit around the giant planet.

The tension was high Monday night, because the burn was a make-or-break maneuver: If Juno's engine didn't perform properly, the spacecraft would go sailing right past Jupiter. And the engine had to kick on — on autopilot, hundreds of millions of miles from Earth — just as Juno was zooming through the harshest part of Jupiter's intense radiation belts, where hordes of electrons zip around at nearly the speed of light. [Juno Team Cheers as Jupiter Arrival Confirmed (Video)]

"The more you know about the mission, you know just how tricky this [maneuver] was, and it had to be flawless," Juno program executive Diane Brown, who's based at NASA Headquarters in Washington, D.C., said during a news briefing here at the Jet Propulsion Laboratory (JPL) after Juno's success was confirmed.

"I really can't put it into words," Brown added. "You imagine what it might feel like, but to actually have it, to know that we can all go to bed tonight not worrying about what's going to happen tomorrow? It's pretty awesome."

Juno principal investigator Scott Bolton, of the Southwest Research Institute in San Antonio, said he let loose a "huge sigh of relief and excitement" when it became clear that Juno had aced the engine burn.

"We're there — we're in orbit," Bolton said, as applause erupted throughout the briefing room at JPL. "We conquered Jupiter!"

The $1.1 billion Juno mission, which launched in August 2011, aims to map out the composition and internal structure of Jupiter, among other goals. Learning what Jupiter is made of — how much water swirls around in its atmosphere, and if it has a core of heavy elements, for example — will reveal a great deal about how the giant planet took shape, mission team members have said.

Juno won't begin studying Jupiter with its nine science instruments until late August, when it will loop back around for another close pass of the gas giant. (Monday night's engine burn placed Juno into a 53-day orbit.)

And the bulk of Juno's science work will start after an Oct. 19 engine burn shifts the spacecraft into its 14-day science orbit. Juno will then perform more than 30 such orbits, before finally plunging into Jupiter's atmosphere in an intentional death dive in February 2018.

So the Juno team has a lot to look forward to over the coming weeks and months.

"It's amazing, it feels wonderful, and it's also just the beginning," said Juno project scientist Steve Levin of JPL.