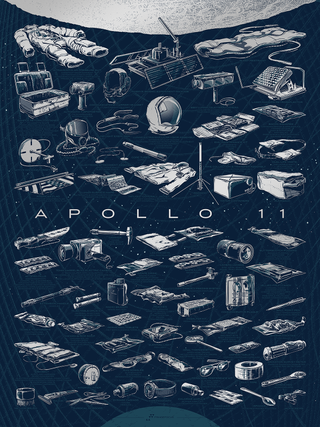 This illustrated poster by Rob Loukotka features a list of more than 200 items taken to the moon on Apollo 11, and 69 illustrations of those items.
(Image: © Rob Loukotka/fringefocus.com)

A crowdfunded campaign to sell illustrated posters of every item that flew to the moon on Apollo 11 has raised more than 14 times its initial goal, with more than two weeks until the campaign ends.

Visual artist Rob Loukotka's poster features 69 detailed illustrations of items that flew to the moon in 1969. The poster also lists the additional items (more than 200 in total) that made the journey.

"Thanks to NASA's impeccable record-keeping, I was able to painstakingly research all of the original launch manifests & stowage lists from the '60s," Loukotka wrote on the Kickstarter page. As of this writing, he has raised $21,626 — almost 15 times his original goal of $1,450.

"Every piece of the survival kit, the dehydrated foods, the maintenance kits, the extravehicular suits, the lunar tools and more are cataloged into this one big poster. 200+ items and 69 detailed illustrations make up this poster celebrating the first time man walked on the moon," he wrote.

Loukotka, who has run several other successful crowdfunding campaigns, explained on the Kickstarter page that he started the Apollo 11 project with a spreadsheet of about 400 objects. He then merged what he saw as similar items and duplicates. He added that as far as he can tell, the poster has just about everything that was taken on the mission, excluding unremarkable items like strings and screws. The piece also excludes the lunar module and its hardware, he wrote.

With the fundraising greatly exceeding his target, Loukotka said he plans to thank his current backers by offering wooden frames for the poster. These frames will include a laser-engraved plaque that says, "The Apollo 11 Project," Loukotka told Space.com. He hasn't set a date yet for when these items will be shipped.

The campaign runs until July 21 at 5:35 p.m. EST, which has special significance, Loukotka said.

"[It's] the exact day Apollo 11 left the lunar surface in 1969 (one day after landing)," he wrote on Kickstarter. "The time represents the exact moment the lunar module docked with the command module exactly 47 years ago. I'm a nerd!"