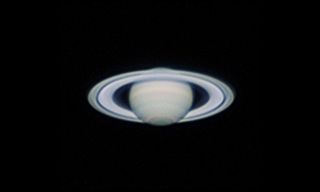 Saturn, Jupiter, Mars, Venus and Mercury will all be visible in July's night sky, if you know where to look. Astrophotographer Andrew Kwon sent in this photo of Saturn at opposition taken in in Mississauga, Ontario, in 2014.
(Image: © Andrew Kwon)

With a little bit of patience — and luck — you'll be able to glimpse the five brightest naked-eye planets during this month.

Jupiter is in the western sky at dusk, but it's getting noticeably lower with each passing evening. During the second half of July, the two "inferior" planets Mercury and Venus (so called because they orbit closer to the sun than the Earth) briefly poke into view above the western horizon right after sunset. They'll be getting together with Jupiter in late August. Mars, which dazzled the eye in late May and early June, now appears only about half as bright as it continues to move away from Earth. Nonetheless, it still ranks near the top of the list when comparing it to the brightness of the stars; only Sirius is brighter. Farther to the left (east) of Mars is mellow-yellow Saturn and ruddy Antares in Scorpius.

In our schedule, remember that when measuring the angular separation between two celestial objects, your clenched fist held at arm's length measures roughly 10 degrees. Here, we present a schedule that provides some of the best planet-viewing times, as well as directing you where to look to see them. [How To Find Jupiter and Other Skywatching Objects in July 2016 (Video)]

July 6 – Mercury is in superior conjunction (beyond the sun) and passes into the evening sky.

July 8 – Jupiter is the brightest and easiest of the evening planets to spot early in July. You can't miss it in the fading twilight; it's easy to notice if you have a good, clear view toward the west-southwest as dusk deepens, since it shines at magnitude -1.8, which is somewhat brighter than Sirius. This evening you'll find it 5 degrees to the upper left of a fat crescent moon. Early in the month, the big planet is still high enough during evening twilight to appear sharp and detailed in telescopes. However, the planet keeps setting earlier. By the end of July, it sinks below the horizon less than 2 hours after the sun.

July 14 – Mars, low in the southern evening sky, is a prominent object of magnitude -1.1 (the most brilliant after Jupiter) in Libra, the Scales. It crosses the meridian soon after sunset and remains above the horizon for most of the night. Mars still outshines Arcturus, a star of similar hue some 45 degrees to the north-northwest. This evening, the "god of war," as Mars is known, can be found 8 degrees below the waxing gibbous moon.

July 15 – Saturn, in the constellation Ophiuchus, is almost due south when night falls. It is about 6.5 degrees above Antares; the golden and reddish lights of Saturn and Antares accent the softness of the summer Milky Way. Saturn shines at magnitude +0.2 (dimmer than Jupiter and Mars); Antares is somewhat fainter. Its magnitude is usually listed as +1.06 but is known to vary irregularly; the star has been reported from magnitude 0.94 to 1.83. This evening, Saturn lies just over 2 degrees below the waxing gibbous moon. All of July is excellent for telescopic viewing of Saturn, which looks less like a product of nature than an artist's inspired whimsy. It is no longer the only known ringed planet (Jupiter, Uranus and Neptune sport thin ring systems), but no other planet looks as pretty. Moreover, this year Saturn's ring system is tilted almost as far into view (26 degrees) as it ever gets. The south edge of the rings completely hides the planet's south polar region, and the rings' north edge can be seen above the planet's north pole.

July 16 – Venus is still lost behind the glare of sunset as far as most people are concerned. But if you're really ambitious this evening, you can try using binoculars to pick Venus out of bright twilight only about 15 minutes after sunset. This appearance is the beginning of Venus' agonizingly slow return to the evening sky for viewers at mid-northern latitudes. It is beginning an apparition that will slowly bring it into prominence as a grand "evening star" in late fall and winter. But there also is an incentive for looking for Venus now, for Mercury, too, has also started climbing out of the sun's afterglow and tonight it will be situated just 0.5 degrees above Venus, though shining only 1/13th as bright. Unfortunately, observers at latitude 40 degrees north will see them only 3 degrees above the west-northwest horizon by 25 minutes after sunset, so very clear skies and binoculars are required for a decent view.

July 30 – This evening, Mercury will be positioned about 0.5 degrees from the bluish 1st-magnitude star Regulus in Leo, the Lion. Best time to look will be about 30 minutes after sunset very low near the western horizon. Try looking for Venus first; Mercury and Regulus will be positioned about 8 degrees to the upper left of Venus. From northern states, binoculars will probably be needed to see Mercury and Regulus low in bright twilight. More southerly viewers will find the pair higher and visible to the naked eye. Mercury is the higher and brighter member of the close pair.