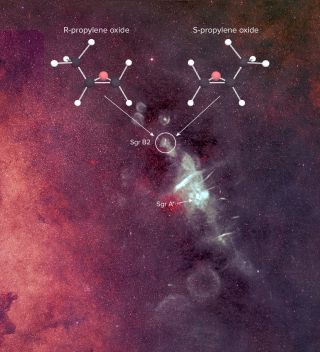 For the first time, scientists have measured a "handed" molecule in interstellar space. The molecule, propylene oxide, comes in both "left-handed" and "right-handed" varieties. It was found in the huge star-forming cloud of gas Sagittarius B2, pictured here alongside Sagittarius A*, the supermassive black hole at the Milky Way's center.
(Image: © B. Saxton, NRAO/AUI/NSF from data provided by N.E. Kassim, Naval Research Laboratory, Sloan Digital Sky Survey)

Molecules with "right-handed" and "left-handed" versions are essential to all life on Earth, and have been found in meteors and comets. Now, for the first time, one has been spotted in interstellar space.

Discovering such molecules in deep space, called chiral molecules, can help researchers understand the development of life on Earth, which is rich in those complex molecules — what presenters at the American Astronomical Society's summer meeting in San Diego called "life's first handshake." The discovery is explained in this new video by Science Magazine.

"This [discovery] is going to provide us with a laboratory to try to test theories about the role that chiral molecules played in the origins of life here on Earth and how that chirality might play a role in the origins of life elsewhere in the galaxy," Brett McGuire, a researcher at the National Radio Astronomy Observatory in Virginia and co-first author on the new work, said at the AAS press conference today (June 14). [50 Fabulous Deep-Space Nebula Photos]

The researchers used the National Science Foundation's Green Bank Telescope in West Virginia and the Parkes radio telescope in Australia to pinpoint the intricate molecule propylene oxide near the center of the Milky Way, in the mammoth star-forming cloud of gas called Sagittarius B2.

Key biological reactions on Earth rely on molecules with the property called chirality — compounds that can form in two different varieties that are mirror images of each other, sort of like left and right hands. Though the molecules are made of the same components, it's impossible to flip one around to make it exactly match the other.

On Earth, most chiral molecules exist largely in a single formation, even though when you create them chemically from scratch, both varieties will form. Many chemical reactions only work when molecules of a particular "handedness" interact with each other.

"When you shake somebody's hand, your right hand shakes another right hand, and it forms that nice, interlocking gesture; if you try to shake a left hand with your right hand it's a little awkward because the interaction is different," McGuire said. "Chiral molecules work the same way."

(For instance, the chemical carvone will smell like spearmint in one configuration, but its mirror image smells like caraway.)

Processes powered by one particular "handedness" will produce more of that same type of molecule, and molecules with the wrong "handedness" won't work at all in many biological systems. Because of that, most of the important chiral molecules on Earth, like amino acids, are all the same "handedness" as each other. But scientists don't know how the Earth came to favor particular varieties to start with.

Researchers have found complex organic molecules on meteorites and comets, including chiral molecules which have shown a slight preference for one handedness over the other. Just a few percent excess "could be the tipping point that pushed life in a single direction, and that gave life the push it needed to, say, use only left-handed amino acids," Brandon Carroll, the work's other first author and a chemistry graduate student at California Institute of Technology, said at the conference.

"But if we want to understand where and how this started, we have to go even further back than the meteorites; we have to look at the gas clouds where these molecules formed from," he added.

In this case, they spotted a hefty dose of propylene oxide in distant interstellar space — about 80 percent Earth's mass, which at room temperature would take up five and a half earths' worth of space, Carroll said.

If chiral materials had existed already in the cloud of gas and dust from which the solar system formed, or if they'd fallen to Earth on a meteorite or had been carried on a comet, that could explain Earth's preference — and also help explain the process of life's first formation on Earth.

The researchers' measurements of the propylene oxide don't reveal which handedness the far-off molecules have; the data from the radio telescopes show only the composition, not how each molecule is put together. However, future work could try to determine that by watching how the molecules interact with polarized light, which corkscrews in a particular direction, the researchers said.

"Now it gives us a testbed, some molecule we can actually go back and perform the far more complicated and challenging observations necessary to detect the handedness," Carroll said. "That's what we're really excited about, because that will let us start to test theories about processes that might actually have chiral preference in the interstellar medium."

The new work was detailed June 14 in the journal Science.