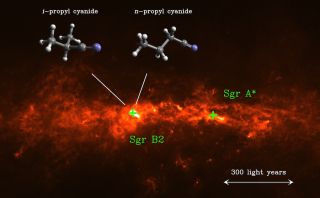 The discovery of a strangely branched organic molecule in the depths of interstellar space has capped a decades-long search for the carbon-bearing stuff.

The molecule in question — iso-propyl cyanide (i-C3H7CN) — was spotted in Sagittarius B2, a huge star-making cloud of gas and dust near the center of the Milky Way, about 27,000 light-years from the sun. The discovery suggests that some of the key ingredients for life on Earth could have originated in interstellar space.

A specific molecule emits light at a particular wavelength and in a telltale pattern, or spectrum, which scientists can detect using radio telescopes. For this study, astronomers used the enormous Atacama Large Millimeter/submillimeter Array (ALMA) telescope in the Chilean desert, which went online last year and combines the power of 66 radio antennas. [5 Bold Claims of Alien Life]

"Amino acids are the building blocks of proteins, which are important ingredients of life on Earth," the study's lead author, Arnaud Belloche, of the Max Planck Institute for Radio Astronomy, told Space.com in an email. "We are interested in the origin of amino acids in general and their distribution in our galaxy."

Scientists have previously found amino acids in meteorites that fell to Earth, and the composition of these chemicals suggested they had an interstellar origin. The researchers in this new study did not find amino acids, but their discovery adds an "additional piece of evidence that the amino acids found in meteorites could have been formed in the interstellar medium," Belloche wrote.

"The detection of a molecule with a branched carbon backbone in interstellar space, in a region where stars are being formed, is interesting because it shows that interstellar chemistry is indeed capable of producing molecules with such a complex, branched structure," Belloche added.

It was first suggested in the 1980s that branched molecules could form on the surface of dust grains in interstellar space. But this is the first time such compounds have been detected. What's more, iso-propyl cyanide seemed to be plentiful — it was almost half as abundant of its more common sister variant in Sagittarius B2, the study found. This means that branched molecules could actually be quite ordinary in interstellar space, the researchers said.

The research is detailed in the Sept. 26 edition of the journal Science.