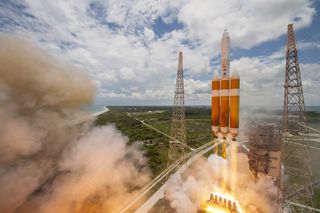 A new U.S. spy satellite roared into orbit Saturday (June 11) atop the most powerful rocket currently in operation.

The NRO is responsible for designing, building and operating the United States' fleet of spy satellites. As is the case with most NRO payloads, NROL-37's activities are classified; a brief description on ULA's website states that the mission is "in support of national defense." [See more launch photos for NROL-37 and its big rocket]

The Delta IV Heavy rocket, which stands 232 feet (71 meters) tall, consists of three "common booster cores" strapped together. The middle booster is topped with a second stage and the payload (in this case, NROL-37).

At launch, the Delta IV Heavy generates about 2.1 million lbs. (950,000 kilograms) of thrust, making it the most powerful rocket in use today. That's a lot, but far shy of the all-time record; NASA's Saturn V rocket, which blasted the Apollo astronauts toward the moon in the late 1960s and early 1970s, produced 7.5 million lbs. (3.4 million kg) of thrust at liftoff.

Two superpowerful American rockets are scheduled to come online in the next few years. SpaceX's Falcon Heavy, whose maiden flight is slated for late this year, will generate about 5 million lbs. (2.3 million kg) of thrust at liftoff, company representatives have said. And NASA's Space Launch System (SLS) megarocket will produce 10 to 20 percent more thrust than the Saturn V when it starts flying in 2018.

The initial SLS configuration will boast 8.4 million lbs. (3.8 million kg) of launch thrust, while a brawnier "evolved" version will produce 9.2 million lbs. (4.2 million kg), NASA officials have said. The space agency is developing SLS to launch the Orion crew capsule toward Mars, asteroids and other destinations in deep space.

Today's NROL-37 launch had been scheduled for Thursday (June 9), but bad weather pushed the liftoff back by two days.