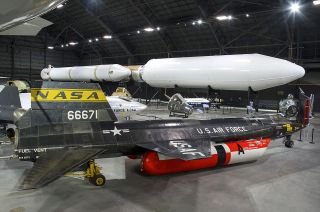 The largest military aviation museum in the world now has the "space" to tell the full story of the United States Air Force's ongoing efforts to extend beyond Earth's atmosphere.

The National Museum of the U.S. Air Force, located at the Wright-Patterson Air Force Base in Dayton, Ohio, officially opened its fourth building with a ceremony Tuesday (June 7) and a ribbon cutting on Wednesday morning. More than a decade in the making, the $40.8 million, 224,000 square-foot (21,000 sq. meter) hangar encompasses four different galleries, including a large exhibit area dedicated to the Air Force's contributions to spaceflight and exploration.

"Our aim is to tell the whole Air Force space story — from shortly after the second World War to the present, and with peeks into the future," Doug Lantry, museum curator, said. "At present, the gallery is opening with what we call "macro artifacts." [Related: NASA's Space Shuttles: Where Are They Now?]

The new Allan and Malcolm Lockheed and Glenn Martin Space Gallery, named for the founders of the aerospace company that bears their names, is located in the museum's fourth building and shares space with the presidential, research and development, and global reach galleries. It showcases historic rocket planes, crewed space capsules, previously classified satellites and massive rockets.

"What we will have in there now is everything from balloon gondolas to aerospace research vehicles like the X-15 and a pair of X-24 [lifting bodies]; manned spaceflight artifacts, including spacecraft from the Mercury, Gemini and Apollo programs, plus a space shuttle trainer," described Lantry in an interview with collectSPACE.

"Probably the most impressively imposing artifact in there is the Titan IVB space launch vehicle," he added. "It's a 96-ton, 204-foot [62 m] monster that is displayed about 13 feet [4 m] above visitors' heads. You're able to walk underneath it."

Whereas many of the other space vehicles were previously displayed in the museum's smaller galleries over the years, the Titan IVB was simply too large to assemble, let alone exhibit, until now. Acquired from Lockheed Martin in 2005, it arrived in Dayton in large and small parts that were held in storage until the fourth building's construction inspired a truly large restoration project. [The Most Destructive Space Weapon Concepts]

Fortunately, the museum's neighbors at Wright-Patterson, the Air Force Research Laboratory, had an available high bay equipped with a very large crane.

"They helped us put together the 86-foot [26 m] payload fairing. We could not have done that without them," Lantry said.

The museum's own restoration specialists then took over, working with other large cranes to not only bring together the rocket's core and solid rocket motors, but also cleaning and painting the colossal components as was needed.

Left over from the end of the Titan IV program in 2005, the rocket and its largest-size fairing enable the museum to tell the story of the Defense Support Program (DSP) satellites operated by Air Force Space Command to detect missile or spacecraft launches and nuclear explosions.

It also provides the museum the opportunity to state it has the "biggest and most impressive Air Force space launch vehicle we can," explained Lantry. "Believe me, that rocket is imposing when you walk under it."

Eventually, the plan is to use the 6,000 square feet (560 sq. meters) underneath the Titan booster to display smaller "more contextual, more deeply penetrating exhibits" about all of the different projects that the Air Force has done in space.

"We'll also uses the spaces between and among the other artifacts to do that, too," said Lantry. "That will take several years. That is the long, long term plan."

For now, Lantry is hoping the large space artifacts impress upon visitors that the Air Force had, and has a role in the nation's space achievements.

"Because there is a large space gallery, the big thing they will hopefully take away with them is that the Air Force has been involved in all of the facets of space exploration and spaceflight, since the beginning of the space age," Lantry said. "If they walk away just knowing that the Air Force is in space, and has been in space, and continues to work in space, that's a very big deal."

"The goal of the gallery is to make it apparent to the visitor that the Air Force plays a huge role in U.S. spaceflight," he said.

See more photographs inside the new space gallery at the National Museum of the U.S. Air Force at collectSPACE.