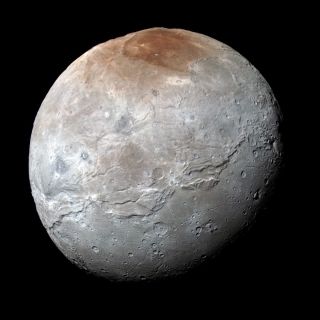 The surface of Pluto's largest moon Charon, seen here in an image captured by NASA's New Horizons spacecraft, is scored by canyons and fissures.
(Image: © NASA/JHUAPL/SwRI)

Long-ago close encounters with planetary building blocks may have cracked open the surfaces of icy moons in the outer solar system — and could perhaps even have created the gigantic Martian canyon system Valles Marineris, a new study suggests.

Researchers have long thought that geological processes such as plate tectonics created the chasms on objects such as Pluto's big moon, Charon, and the Saturn satellites Dione and Tethys. But new modeling work identifies another possible culprit: the gravitational pull of big, close-flying objects, which were abundant in the solar system's early days.

"If you take Silly Putty and throw it on the floor, it bounces; that's the elastic part," Quillen said in a statement. "But if you pull on it rapidly and hard enough, it breaks apart."

To capture this complex behavior, Quillen and her colleagues modeled icy moons as if their interiors were composed of many small objects connected by springs, an approach other researchers had not taken before, she said.

"I was inspired by computer graphics code in how to model the icy moons," Quillen said. "The inside of the moons is similar to how blood splatter is modeled in games, and the outer, icy crust is similar to modeling clothes and how they move. But I, of course, had to ensure the code matched the underlying physics."

The computer models suggest that Charon, Dione and other icy moons could be cracked open by close encounters with a large object — one about as big as the particular moon itself.

"Such an encounter can induce sufficient stress on the surface to cause brittle failure of an icy crust, and simulated fractures can extend a large fraction of the radius of [the] body," the researchers wrote in the new study, which has been accepted for publication in the journal Icarus.

Such near misses would have been more common in the early solar system than were direct or grazing impacts, the scientists added.

Intriguingly, the simulations also suggest that the same basic process might have formed Valles Marineris, the enormous Martian canyon system that stretches for 2,500 miles (4,000 kilometers) and, in places, is 125 miles (200 km) wide and 6 miles (10 km) deep. But that's just a hypothesis, the researchers stressed.

"A tidal encounter is an intriguing alternate explanation for the extensional stress forming Valles Marineris, but a more sophisticated study would be needed to test it and contrast it with tectonic models for the formation of Valles Marineris," Quillen and her team wrote in the study.