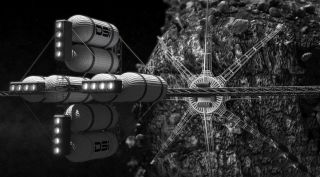 WASHINGTON — The White House has endorsed a proposal where the U.S. Federal Aviation Administration (FAA) would provide oversight of "non-traditional" commercial space activities, eliminating a policy barrier for proposed missions beyond Earth orbit.

In a report submitted to Congress last month by the White House Office of Science and Technology Policy (OSTP), the administration said a "mission authorization" regime, with a minimal degree of government oversight, would ensure the U.S. upholds its obligations under the Outer Space Treaty of 1967.

"The economic vitality of the American space industry is best served with a clear and predictable oversight process that ensures access to space and imposes minimal burdens on the industry," states the report. "The Administration supports a narrowly tailored authorization process for newly contemplated commercial space activities." [Wildest Private Deep-Space Mission Ideas: A Countdown]

OSTP submitted the report to Congress to comply with a provision of the Commercial Space Launch Competitiveness Act, legislation signed into law last November. That bill included a section requiring a study on commercial space activities and regulatory issues involving them.

That provision, and the subsequent report, were triggered by concerns that the current licensing system for commercial launches and spacecraft does not cover emerging non-traditional applications, like lunar landers and asteroid mining. The State Department has indicated that current regulations don’t allow for the "authorization and continuing supervision" of those activities as required by Article 6 of the Outer Space Treaty.

"If the United States wants to be perceived as being compliant with the Outer Space Treaty, somebody has to authorize and oversee those operations," said George Nield, FAA associate administrator for commercial space transportation, in a speech at the April 28 meeting of the Commercial Space Transportation Advisory Committee (COMSTAC) here.

Nield said that four companies have already approached his office seeking a payload review, a part of the commercial launch licensing process where the FAA consults with other agencies to identify any potential policy issues about the proposed mission. In each case, he said, the State Department has replied that the current regulatory system doesn’t provide for the oversight of those activities required by treaty.

"Those companies are now in limbo," he said. They can proceed with their proposed missions, "but there’s always the possibility that someone will stand up at the last minute and say you can’t do that, because we don’t say what our process is for complying with the treaty."

The OSTP report recommends that FAA be given that oversight responsibility, in a concept known as "mission authorization." That review would be based on the FAA’s existing payload reviews and include interagency reviews to confirm that the proposed mission does not conflict with U.S. national security concerns or treaty obligations.

The mission authorization process would not, at least initially, include any additional regulation. "At this early stage in the development of these activities, consisting primarily of experimental technology development and demonstration, the Administration believes it would be premature to establish a comprehensive regulatory framework mirroring those for mature commercial space activities, such as launch services," the OSTP report states.

"We’d look at the proposed operation and we’d see if this was consistent with our international obligations, foreign policy and national security," Nield said. "If so, you’re good to go. You can check that box and have that regulatory certainty."

He added that the mission authorization system would not apply to communications and remote sensing missions currently licensed by the Federal Communications Commission and the National Oceanic and Atmospheric Administration, respectively. Some companies in those industries had worried that a mission authorization requirement would introduce an additional bureaucratic burden for them.

A section of the American Space Renaissance Act, a wide-ranging space policy bill introduced in April by Rep. Jim Bridenstine (R-Okla.), contains similar language. It established an "enhanced payload review" that includes treaty obligations, national security and related issues. That bill is not expected to pass intact, but provisions may be inserted into other legislation.