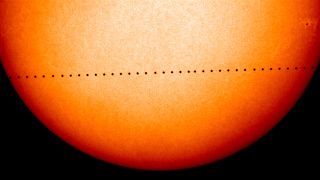 Mercury will pass across the sun May 9 over the course of more than 7 hours during a rare transit event. Amateur astronomers and NASA scientists will be watching carefully.
(Image: © NASA)

While scientists are used to seeing sunspots and solar flares crossing the sun's surface, a different kind of spot will pass through on Monday (May 9): the dark shadow of Mercury, which will travel between the sun and Earth that morning.

A new video from NASA sets out what you need to know about the rare celestial event, called a transit, which occurs around 13 times per century, as well as what NASA hopes to learn. Skywatchers who miss Monday's transit will have to wait until November 2019 to catch a glimpse.

Mercury's journey in front of the sun will start around 7:15 a.m. EDT (1115 GMT) and will take more than 7 hours, so even if the sun isn't up yet at the transit's beginning most areas in the Americas, Atlantic and Pacific, Europe, Africa and much of Asia should be able to see part of the event, officials said in the video.

Observers will need to use a telescope with a safe solar filter, or a dedicated solar telescope, to avoid eye damage from the sun. Local observatories and amateur astronomy groups will likely host opportunities to view the transit, and NASA itself and the Slooh Community Observatory will host webcasts of the event highlighting the event's different stages.

During the transit, NASA scientists will have a rare opportunity to study the composition of Mercury's atmosphere — the thinnest in the solar system — as the sun shines through it.