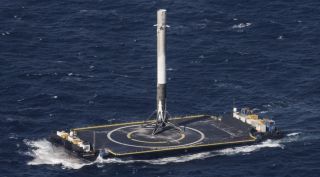 SpaceX's Falcon 9 Full Thrust rocket's first stage successfully landed on its drone ship April 8 during a successful mission to deliver SpaceX's Dragon capsule to the international space station. The stage is now undergoing a fresh series of test firings as SpaceX prepares for regular reuse of rocket first stages. Investors, customers and competitors are now assessing how much cost SpaceX can remove from its launch price through first-stage reuse.
(Image: © SpaceX)

KOUROU, French Guiana — Now that SpaceX appears on the verge of being the first to reuse rocket hardware since NASA with the U.S. space shuttle, investors and competitors are sharpening their pencils to assess the business case.

The prima facie appeal of reusing rockets has always obscured the challenges of refurbishing, at low cost, a rocket stage and engine bloc that has suffered the stresses of hurtling through the atmosphere in advance of landing.

"It's quite fundamental," SpaceX founder Elon Musk said April 8 after the Falcon 9 first stage made a clean touchdown on a drone ship located offshore the Cape Canaveral Air Force Station, Florida, as part of a successful mission to deliver supplies to the international space station for NASA. The stage has since been returned to port and will be repeatedly test-fired to determine its fitness for reuse as early as this year.

"It's just as fundamental in rocketry as it is in other forms of transport – such as cars or planes or bicycles," Musk said in a post-launch briefing.

NASA engineering veterans of the space shuttle would surely agree about its being fundamental. But after beating their heads against the problem for years, they also would say it's much more difficult than hopping back into your car.

"The SSMEs were reusable," Dan Dumbacher, former NASA deputy associated administrator for exploration systems development, said of the space shuttle main engines. "We tried to make them reusable for 55 flights. Look how long and how much money it took for us to do that, and we still weren't completely successful for all the parts. I want to be realistic: We are not as smart as we think we are and we don't understand the environment as well as we think we do."

Dumbacher was speaking in April 2014, before Hawthorne, California-based SpaceX succeeded in landing the Falcon 9 first stage, first in December on a pad near the launch site, and then during the April 8 mission. But his caution related not to the fact of landing safely, but to the economics of refurbishment.

SpaceX is a privately held company that does not publish its financial statements, making a detailed cost analysis difficult. Outsiders are left with piecing together what they can, based on SpaceX's public statements.

In March, SpaceX President Gwynne Shotwell said the company could expect a 30 percent cost savings from reusing the first stage. If this translated into a 30 percent price reduction to customers, that would drop Falcon 9's advertised price to $42.8 million from today’s $61.2 million.

When measured by contract volume, SpaceX's biggest customer is SES of Luxembourg. SES has said repeatedly it is willing to be the inaugural customer for a reused first stage, but would like the price to move closer to $30 million, at least for the first flight.

The interest of SES, a publicly traded company, in rocket reuse has set in motion analyses by investment banks covering the commercial satellite telecommunications industry. The latest is from Jefferies International LLC.

In an April 25 report, Jefferies takes the $61.2 million list price for a Falcon 9 launch and assumes SpaceX makes a gross margin of 40 percent on the launch, leaving a direct per-launch cost to SpaceX of $36.7 million. This includes the costs of the fueled rocket, and of launch campaign.

SpaceX founder Elon Musk has said the first stage accounts for about 75 percent of the total vehicle cost. If the 40 percent gross-margin estimate were correct, that would mean a total first-stage cost of $27.5 million.

Musk has said the first-stage engine could be reused dozens of times. Jefferies assumes it is used 15 times.

If SpaceX passed on to its customers 50 percent of the cost savings, the company could reduce today's Falcon 9 price by 21 percent, to $48.3 million, Jefferies concludes.

If SpaceX gave customers 100 percent of the savings, the launch price would drop by up to 40 percent, to $37 million.

"There are ongoing challenges in translating a reused rocket to tangible capex savings – worries about it failing, insurance implications, retrofitting turnaround, building up a critical mass of reused first stages in the warehouse," Jefferies said. "But the direction of travel is clear."

Musk said the fuel used on a Falcon 9 is between $200,000 and $300,000. Reserving fuel in the first stage for landing adds mass to the vehicle and deprives it of performance, effectively carrying fuel instead of extra payload — a penalty that expendable rockets do not need to pay. Musk was addressing not the performance penalty, but the issue of fuel cost, which is a non-issue in the overall economics of reusability.

While focusing on the first stage, SpaceX would like to return the rocket's fairing as well. "That will certainly help, because each of these costs several million," Musk said.

SpaceX has not addressed how many launches per year it would need to close the business case for reusability. But this is a key issue.

The economies of scale that SpaceX achieves through Falcon 9’s design of using identical engines throughout the vehicle – nine on the first stage and one on the second – will likely be diluted once reused first stages are added into the mix.

The amount of dilution will depend on how many times the stages are reused, and what SpaceX can reasonably assume as an annual launch rate.

SpaceX has not publicly disclosed what it views as a minimum acceptable launch cadence.

SpaceX's principal competitor, Arianespace of Europe, sees this issue as a potential death blow for any European attempt to reuse its Ariane rockets. In fact, it's a double whammy for Europe because the same problem that makes it uneconomic for Arianespace makes it necessary for SpaceX to become even more aggressive in the global commercial launch market.

Arianespace Chief Executive Stephane Israel, in an April 23 briefing at Europe's Guiana Space Center here on the northeast coast of South America, said Europe's launch sector can only guess at how much SpaceX will need to spend to refurbish its Falcon 9 first stages.

Israel said European assessments of reusability have concluded that, to reap the full cost benefits, a partially reusable rocket would need to launch 35-40 times per year to maintain a sizable production facility while introducing reused hardware into the manifest.

Arianespace's Ariane 6 rocket, scheduled to debut in 2020, is forecasted to launch 12 times per year starting in 2023, when the current Ariane 5 vehicle is retired.

This rate may increase depending on developments in the commercial market. Seven of the 12 annual Ariane 6 campaigns will be devoted to commercial launches, each carrying two satellites. The five other launches will be for European government customers.

Israel's argument, which he has made before, is that even if first stages can be recovered and refurbished in a cost-effective way, the launch rate needed for maximum cost savings – and hence price reductions to customers – is beyond Europe's reach.

The only nations today whose governments are launching sufficiently often to reach those rates are the United States and China, and even these government markets may be insufficient, in and of themselves, to close the business case.

That means any launch provider introducing reusability will have a maximum incentive to search for commercial business outside its domestic market.

The scenario European launch officials fear is one in which SpaceX succeeds in refurbishing stages at a relatively low cost, and then – to close reusability's business case — becomes even more aggressive on the international market, which is where Arianespace generates most of its revenue.