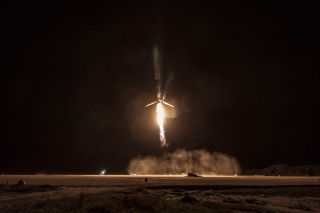 A SpaceX Falcon 9 rocket descends toward Landing Pad 1 at the Cape Canaveral Air Force Station in Florida during a successful landing on Dec. 21, 2015 after delivering 11 ORBCOMM satellites into orbit.
(Image: © SpaceX)

Last month, the private spaceflight company SpaceX achieved an amazing feat: launching a rocket into space, and then landing it back on Earth in a history-making moment.

Not only that, SpaceX stuck the rocket landing at night, and did it live online to boot. The sheer joy of that epic rocket landing comes through loud and clear in this awesome new video from SpaceX, which the company released Tuesday (Jan. 12) ahead of its next launch on Sunday (Jan. 17).

Just look at the faces of these SpaceXers as they celebrate the Dec. 21 landing of a Falcon 9 rocket booster at the Cape Canaveral Air Force Station in Florida. Listen to them cheer. They are jubilant, and for a good reason.

SpaceX tried several times in 2015 to land an orbital Falcon 9 rocket on an automated drone ship in the ocean, and then suffered a major blow last June when a rocket exploded during the launch of an unmanned Dragon ship carrying NASA supplies for the International Space Station. So the Dec. 21 launch was as much a return-to-flight for the Falcon 9 as it was a major rocket technology test for SpaceX.

In fact, the rocket landing was actually a bonus for SpaceX. The company's main goal was to launch 11 satellites into orbit for its customer ORBCOMM, which the Falcon 9 rocket also achieved as planned.

SpaceX and its billionaire founder Elon Musk have long been pursuing reusable rockets as a way to dramatically lower the cost of space travel. With its first rocket landing in the can, the Hawthorne, California-based SpaceX is now aiming for an even more ambitious feat in 2016: The launch, landing and then relaunch of a Falcon 9 rocket.

"I think we're going to definitely refly one of the subsequent boosters," Musk told reporters just after the Dec. 21 rocket landing. "We have quite a big flight manifest and we should be doing well over a dozen flights next year (2016). So I think probably sometime next year we will aim to refly one of the rocket boosters."

SpaceX's next mission will launch on Sunday from Vandenberg Air Force Base in California. That flight will launch NASA's Jason-3 ocean-monitoring satellite into orbit atop a Falcon 9, with SpaceX expected to try to once again to land the Falcon 9 booster on an ocean platform.

SpaceX isn't alone in its pursuit of reusable rockets.

While last month's rocket landing made history as the first orbital booster to fly into orbit before returning to Earth, it occured about four weeks after a similar feat by SpaceX rival Blue Origin, a private spaceflight company founded by Amazon CEO Jeff Bezos. Blue Origin launched and landed its suborbital New Shepard rocket in West Texas during a successful Nov. 23 test flight.