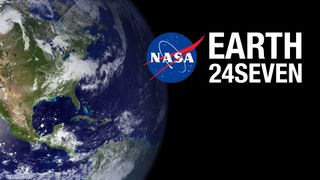 NASA is celebrating Earth Day 2016 with the #24Seven campaign to show how it studies Earth, and to collect photos from the public.
(Image: © NASA)

NASA is taking Earth Day online today (April 22) with a project to share how its Earth science missions work and to find out how you'll mark the day, too.

The U.S. space agency is celebrating the Earth with #24Seven, a social media project to showcase its missions to study our planet. The project also aims to collect photos and videos from the public's Earth Day activities.

"This Earth Day, NASA is giving the world an insider's look into the myriad activities the space agency conducts in a typical day to study and protect our home planet. And ─ we're asking the world to share your Earth Day with us," NASA officials wrote in an announcement. "On April 22, NASA will post about 200 images across nearly 100 different social media channels that capture the breadth of the agency's 24-hour-a-day work to study Earth." [Related: Build a Recycled Cardboard Spaceship for Your Kid (Video)]

NASA will post its Earth science images on Twitter and other social media outlets using the hashtag #24Seven. Members of the public can share their images with NASA by tagging them with #24Seven as well. More details on how to participate in the project are on NASA's announcement page here.

"Together we can create a truly international picture of how the world celebrates Earth Day," NASA officials wrote.

NASA's #24Seven Earth Day campaign actually started Thursday (April 21) when Earth Day began at the international date line in Samoa and Christmas Island. It will continue through 8 a.m. EDT (1200 GMT) on Saturday (April 23) when Earth Day will end for residents of Baker Island on the other side of the date line. The space agency will then compile the best and most remote posts from the public into a video to be released in a few weeks.

To learn more about how NASA studies the Earth from space and the ground, visit: http://www.nasa.gov/earth.