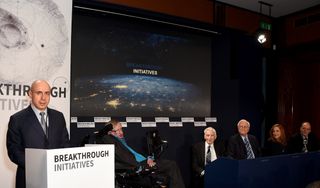 On April 12, 2016, billionaire Yuri Milner and cosmologist Stephen Hawking will announce a new space-exploration project called Starshot. This photo shows Milner (left), Hawking (second from left) and other researchers in July 2015, during the unveiling of a $100 million search for signs of intelligent alien life called Breakthrough Listen.
(Image: © Breakthrough Initatives)

Stephen Hawking will announce a mysterious new space exploration initiative Tuesday, and there's plenty of reason to think it will be a pretty big deal.

There's the famed astrophysicist's involvement, for starters, as well as the project's name — "Starshot." Furthermore, Hawking will make the announcement with billionaire entrepreneur and investor Yuri Milner, who is also bankrolling a 10-year, $100 million search for extraterrestrial intelligence (SETI) initiative called Breakthrough Listen.

Hawking was among a group of researchers who helped unveil Breakthrough Listen last July. (Milner is also funding a related project called Breakthrough Message, which will award prizes to people who help craft the best messages humanity could send to alien civilizations.)

That's pretty much all we know about Starshot — the project's name and the involvement of Hawking and Milner. A media advisory announcing the unveiling, which will occur Tuesday at 12 p.m. EDT (1600 GMT) during an event at One World Observatory in New York City, describes Starshot only as a "new space exploration initiative."

These two milestones are marked every year on April 12, during a celebration known as Yuri's Night . Milner was born in Moscow, and he has said he was named after Gagarin.

This story was originally posted on Monday, April 11. It was updated on April 12 to include the nature of the Breakthrough Starshot initiative.