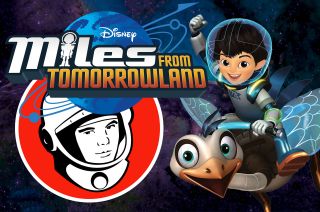 Disney’s "Miles from Tomorrowland" and Yuri's Night have teamed up to inspire kids' interest in space.
(Image: © Disney Junior/Yuri’s Night/collectSPACE.com)

Disney's intergalactic animated TV series "Miles from Tomorrowland" is teaming up with Yuri's Night, the world space party, to make the celebration of the first human spaceflight even more stellar.

"We are honored to be working with Disney Junior and the 'Miles from Tomorrowland' team, who share in our goal of inspiring children and their parents around the world with activities about the benefits of human exploration, both at home and in space," said Ryan Kobrick, the chairman and president of the Yuri's Night global non-profit organization.

Among the hands-on activities included in the kit are a cut-out space helmet, a planet mobile featuring the StarJetter and Stellosphere spaceships from the animated series and the recipes to make Cosmic Cocoa, Superstellar Sammies (sandwiches) and Tomorrowland Trail Mix.

Kids can also learn how to make a "fizzing" planet Mars, a nebula in a jar and puffy paint planets.

"Yuri Gagarin was the first human in space. So when we say something is 'Yuri,' it means it's incredible, unexpected and very special," says Captain Phoebe Callisto (voiced by actress Olivia Munn), Miles' and Loretta's scientist mother, in the episode, which first aired in July 2015.

"Just like Yuri himself," adds Leo Callisto (Thomas Kenny), Miles' and Loretta's father and a spaceship engineer. "That's why every April 12, the day Yuri [Gagarin] launched, there are parties all over the galaxy."

"Thanks to [that episode of] 'Miles from Tomorrowland,' the concept of Yuri's Night has been shared with millions of young viewers and their families around the globe," said Loretta Hidalgo Whitesides, the co-founder of Yuri's Night, who shares many similarities to the series' character of the same name.

"I never imagined when we started Yuri's Night 15 years ago that the event would reach over four million people worldwide at more than 3,000 individual events, educating a global audience about space exploration and its many benefits," said Whitesides in a statement announcing the partnership with Disney Junior.

"Miles from Tomorrowland" follows the space adventures of young Miles Callisto as he travels through the universe with his family. Like the space explorers whom Yuri's Night celebrates each year, the Callistos rely on teamwork and problem-solving to overcome the obstacles they encounter while completing missions throughout different galaxies.

Since 2001, Yuri's Night has been celebrated in more than 75 countries on all seven continents, in virtual worlds such as Second Life and by astronauts and cosmonauts aboard the International Space Station. The celebration this year coincides with Roscosmos, Russia's federal space agency, declaring 2016 the "Year of Yuri Gagarin."

See how Yuri Gagarin is shown on Disney's "Miles from Tomorrowland" at collectSPACE.