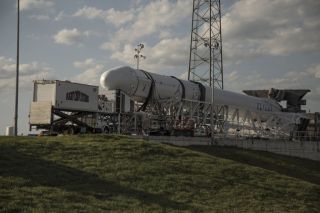 A SpaceX Falcon 9 rocket will launch a cargo capsule toward the International Space Station (ISS) and also attempt to land on a robotic "drone ship" in the Atlantic Ocean today (April 8), and you can watch all the action live online.

The two-stage Falcon 9 and SpaceX's robotic Dragon spacecraft are scheduled to blast off from Cape Canaveral Air Force Station in Florida at 4:43 p.m. EDT (2043 GMT) today. You can watch the launch live here at Space.com, courtesy of NASA TV; coverage begins at 3:30 p.m. EDT (1930 GMT).

If all goes according to plan, the Falcon 9's first stage will separate shortly after liftoff, and then perform several engine burns to head toward a soft, vertical touchdown on the drone ship, which is named "Of Course I Still Love You." [Inside SpaceX's Epic Fly-back Reusable Rocket Landing (Infographic)]

SpaceX has tried such ocean landings four times in the past 15 months, and each time the result was a tantalizing near miss: The Falcon 9 first stage hit the target but toppled over and exploded on the ship's deck.

The company has succeeded in landing a Falcon 9 on dry land, pulling off this historic feat during an orbital liftoff from Cape Canaveral this past December. (Blue Origin, Amazon.com founder Jeff Bezos' private spaceflight company, has successfully launched and landed its New Shepard rocket three times - most recently during on Saturday, April 2 - but only during suborbital flights.)

It's easier to land a rocket on terra firma than on a ship, which presents a smaller target and is also subject to the motion of the sea, said Hans Koenigsmann, SpaceX's vice president of mission assurance. But coming all the way back to the launch site requires more fuel, which may not be available, depending on the mission profile. (Rocket landings are secondary goals in these launches, which are also lofting spacecraft to orbit.)

It may have been possible to try to touch down at Cape Canaveral today, but a sea landing makes more sense, Koenigsmann said.

"On this particular flight, we decided we want to go to the drone ship and see if we can get a successful landing on the drone ship, partly also because the next two or three flights are going to be drone-ship landings — there's no choice there, because we can't get to land," he said during a prelaunch press briefing Thursday (April 7).

"It's a good opportunity for us to refine our drone-ship-landing capabilities and get this done," he added. "In the long run, that is certainly something that we need to demonstrate over and over again to get the first stages back."

SpaceX will host its own webcasts of the launch as well, which will be featured here.

These landing tries are part of SpaceX's effort to develop fully and rapidly reusable rockets, technology that company founder and CEO Elon Musk has said could eventually cut the cost of spaceflight by a factor of 100.

While the Falcon 9's first stage is coming back to Earth, Dragon will continue its climb to orbit. The uncrewed capsule is loaded with nearly 7,000 lbs. (3,175 kilograms) of supplies and scientific gear, which it will deliver to the ISS upon a planned arrival on Sunday (April 10).

Dragon's cargo includes the Bigelow Expandable Activity Module, or BEAM, a prototype designed to see how inflatable habitats perform in orbit. BEAM's maker, Bigelow Aerospace, aims to eventually provide expandable habitats for use in Earth orbit and on the surface of the moon and Mars.

The weather looks good for today's launch; there is only a 10 percent chance of a weather-related scrub, officials with the U.S. Air Force's 45th weather squadron said.