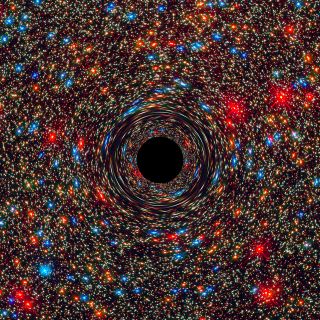 The immense black hole at the center of the galaxy NGC 1600 appears to be 17 billion times the mass of the sun. This computer-simulated view shows a supermassive black hole at a galaxy's core.
(Image: © NASA, ESA, and D. Coe, J. Anderson, and R. van der Marel (Space Telescope Science Institute))

One of the biggest black holes ever found sits in a cosmic backwater, like a towering skyscraper in a small town.

Astronomers have spotted a supermassive black hole containing 17 billion times the mass of the sun — only slightly smaller than the heftiest known black hole, which weighs in at a maximum of 21 billion solar masses — at the center of the galaxy NGC 1600.

That's a surprise, because NGC 1600, which lies 200 million light-years from Earth in the constellation Eridanus, belongs to an average-size galaxy group, and the monster black holes discovered to date tend to be found in dense clusters of galaxies. So researchers may have to rethink their ideas about where gigantic black holes reside, and how many of them might populate the universe, study team members said. [The Strangest Black Holes in Space]

"The black hole is much bigger than we expected for the size of the galaxy or where this galaxy lives, the environment," said study co-author Chung-Pei Ma, an astronomer at the University of California, Berkeley.

"That's the puzzling part — or the intriguing part — of the result," she told Space.com. "There may be more NGC 1600s out there lurking at more ordinary sites, like small towns in the U.S. rather than Manhattan."Ma is head of the MASSIVE Survey, a multitelescope effort that began in 2014 to identify and catalogue the most massive nearby galaxies and black holes. NGC 1600 first showed up in the survey with data from the McDonald Observatory in Texas.

Although the initial observations weren't detailed enough to see the spectrum of light from the galaxy's center clearly, Ma and her colleagues could already tell that they were looking at something extraordinary: "It was a little bit like looking at a hurricane from very far away," she said. "We couldn't quite tell how big this hurricane was, this black hole was, but the hurricane was so big that we already started to feel the wind using this coarser data."

Suspecting they had spotted a very large black hole, study team members next investigated the elliptical galaxy using the northern half of the Gemini Observatory, twin telescopes situated in Hawaii and Chile. Gemini allowed them to probe the black hole's "sphere of influence," Ma said — the region where the black hole's mass held more sway than the overall galaxy's, where it was whipping the stars into action. They also scoped out the site with data from NASA's Hubble Space Telescope.

The stars "were going so fast that the only way they could be travelling at this speed is if you had a 17-billion-solar-mass black hole at the center," she said.

The largest supermassive black hole ever found contains up to 21 billion times the mass of the sun, and resides in a more expected location: the incredibly dense Coma Cluster, which includes more than 1,000 identified galaxies. (For comparison, the black hole lurking at the center of the Milky Way totals around 4 million solar masses.)

The black hole in the Coma Cluster resides in a galaxy surrounded by bright peers, but NGC 1600 outshines its neighboring galaxies by at least a factor of three. NGC 1600's black hole takes up about 2 percent of its galaxy's mass — which is about 10 times larger than black holes at the center of their galaxies are expected to be.

Small black holes can form when massive stars collapse. The enormous ones at the centers of galaxies likely grow so large by taking in a lot of dust and debris early on in their lives and by colliding and merging with other black holes, which occurs when two galaxies combine.

"The way we understand how galaxies and black holes grow to such high masses is from how galaxies form," Ma said. "Typically, we believe they form by emerging galaxy collisions, or cannibalism — they collide together, like the Milky Way and the Andromeda galaxy: we are approaching each other, and we're going to collide one day. So we are going to form a bigger galaxy, and the two individual black holes of the progenitor galaxies would come together to form a bigger black hole." [Watch: Milky Way and Andromeda Galaxies Collision Simulated]

So the biggest galaxies are often formed from several smaller galaxies that merged, whose corresponding black holes have merged as well. A more crowded cluster of galaxies creates favorable conditions for extremely large black holes to form, it seems — but NGC 1600 is in a much sparser area.

"One possibility for how to get a big mass is maybe NGC 1600 had eaten up its friends," Ma said. "It gobbled up its friends, and during the process it acquired their black holes — maybe it got to be so big at the expense of its friends."

That could explain the unusually empty neighborhood around NGC 1600.

Alternatively, the black hole could have been in a region of the universe that had a lot of gas early in its life, Ma said.

"The universe contained a lot of gas when it was younger," she said. "Maybe it got really, really big when the galaxy was very young."

If that were the case, Ma added, the black hole could have grown to its current size without ever residing in a more densely populated area.

Besides probing the mysteries of its location, the researchers are zeroing in on the condition of the black hole itself — or, potentially, the black holes themselves.

When two galaxies merge, their central black holes circle each other, getting closer and closer until they combine into one. The researchers' observations suggest that the black hole at NGC 1600's center might actually be two in the process of merging, or one that very recently merged.

The key insight there is that, while the galaxy shone brightly with starlight, the center seemed unusually empty. Such large galaxies usually have cores that are correspondingly bright, Ma said.

"The way I like to say it is, for some reason, the stars seem to be scared of the very center; they somehow don't want to get very close," she said. "Right now, the most elegant way to explain the existence of this scoured-out region is by binary black holes."

Stars that are too distant to be directly pulled into such a system can still be heavily influenced by it. The dynamics of a system with two supermassive black holes at its center are such that approaching stars whip around and are accelerated outward, fleeing the system and forcing the black holes to move a tiny bit closer to one another, Ma said. Each star has little effect, but over time, the black holes are drawn closer and closer together — and eventually coexist in a ring where most nearby stars have been flung away.

Researchers can't currently tell if the system is still two black holes or has already merged into one. But NGC 1600 could be a prime candidate for scientists who study gravitational waves to scrutinize, Ma said: Gravitational waves would be generated by black holes that are still circling and colliding, but not by ones that have already combined.

"It would be interesting to find more black holes of this mass range and check whether this is an outlier or typical case," Loeb, who was not involved in the study, told Space.com in an email.

"The fundamental question is, which environmental conditions nurture the growth of the most massive black holes?" he said. "We would love to know the answer to that question through future studies like this one."

Loeb added that the NGC 1600 black hole's size makes it a good target for the Event Horizon Telescope, a coalition of nine telescopes around the world that will work together to image black holes.

Study team members hope to further investigate NGC 1600 with the Hubble telescope to get a better look at its core and pin down the black hole's mass more precisely, and they will continue to learn about the distribution of large black holes via the MASSIVE study.

Sparsely populated parts of the galaxy are much more common than the superdense areas where the largest black holes have been found so far. So, if black holes this large are common in such areas, too, NGC 1600 might just be "the tip of the iceberg," Ma said. MASSIVE should reveal just how common the huge bodies are, and expand researchers' understanding of the beasts, she added.

"I'm confident we're going to find black holes — if we don't, that would be really, really strange — but the question is going to be … how massive can these black holes be? Is 17 billion, 20 billion [solar masses] where they stop growing? Or could there be even bigger monsters out there we haven't found?"

The new work was published online today (April 6) in the journal Nature.