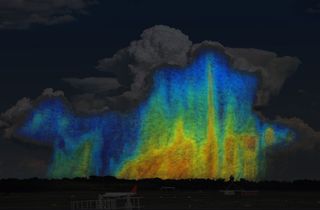 This image shows how the size and distribution of raindrops varies within a storm. Blues and greens represent small raindrops that are 0.5-3.0 millimeters in size. Yellows, oranges and reds represent larger raindrops that are 4-6mm in size. A storm with a higher ratio of yellows, oranges, and reds will contain more water than a storm with a higher ratio of blues and greens.
(Image: © NASA/Goddard)

You might assume that all raindrops are the same, but scientists say that's not the case. And they now have the pictures to prove it.

Thanks to a research effort by NASA and the Japan Aerospace Exploration Agency, researchers have taken the first 3-D snapshots of precipitation — both raindrops and snowflakes — from the vantage point of space.

The pictures were taken from the GPM Core Observatory, a satellite launched in 2014 that's a collaboration between the two nations. GPM's mission is to gain a better understanding of Earth's water and energy cycles and provide better forecasting of extreme events that cause natural disasters. The snapshots help further those objectives.

"The drop size distribution is one of many factors that determines how big a storm will grow, how long it will last and how much rain it will ultimately produce," Joe Munchak,a research meteorologist at NASA's Goddard Space Flight Center in Greenbelt, Md., said in a NASA press release. "We've never been able to see how water droplet sizes vary globally until now."

Clouds generate different sizes of water droplets, depending upon various factors. The cores of clouds at lower altitudes generally produce bigger raindrops, because they collide with each other and combine as they fall to Earth. On the edges of clouds and at higher altitudes, in contrast, make smaller droplets, which are less likely to combine. Scientists refer to the number of drops and snowflakes of different sizes at various locations within a cloud as the "particle size distribution."

That's important, because the ratio of large drops to medium or small-sized ones helps scientists to predict the amount of rain or show that will fall. According to Munchak, scientists used to be limited in such predictions, because of a lack of data.

"Without knowing the relationship or the ratio of those large drops to the smaller or medium sized drops, we can have a big error in how much rain we know fell and that can have some big implications for knowing long term accumulations which can help with flash flood predictions," said Munchak.

Scientists created the 3-D images with data collected by the satellite's Dual-frequency Precipitation Radar (DPR). They also utilized the GPM Microwave Imager, which uses a set of 13 optimized frequencies to retrieve heavy, moderate, and light precipitation measurements at the Earth's surface.