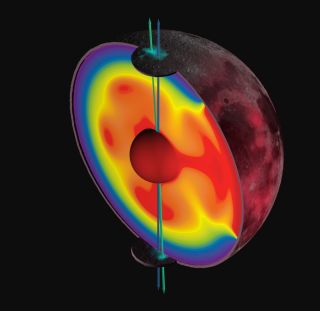 A cross section through the moon showing lunar polar volatiles (in cyan) and how they trace an ancient spin pole (green arrow). The re-orientation from that ancient spin pole to the present-day spin pole (blue arrow) was driven by the formation and evolution of the Procellarum, a region on the lunar nearside associated with a high abundance of radiogenic heat-producing elements, high heat flow and ancient volcanic activity.
(Image: © James Tuttle Keane)

The moon's poles have shifted over the eons, likely as a result of geological activity beneath the lunar crust, a new study suggests.

This finding — which is based on an analysis of the distribution of water ice near the lunar north and south poles — sheds light on the structure and evolution of the moon, and also provides clues about where Earth's water came from, researchers said.

"The ice at the poles of the moon records the interior evolution of the moon, which seems crazy — that is the last place you would think to look," said study lead author Matt Siegler, of the Planetary Science Institute in Tucson, Arizona, and Southern Methodist University in Dallas. [Video: The Moon's Axis Shifted 6 Degrees Over 1 Billion Years]

"Also, that means the ice has to be really old, and therefore may record the ancient delivery of ice to the inner solar system," Siegler told Space.com via email.

Water on the moon

Observations made by a variety of spacecraft over the past few decades suggest that the moon harbors a lot of water ice in permanently shadowed craters near the poles, which are some of the coldest locales in the solar system.

Siegler and his colleagues studied measurements made by two of these probes: NASA's pioneering Lunar Prospector (LP) spacecraft, which circled the moon from January 1998 through July 1999, and the agency's Lunar Reconnaissance Orbiter (LRO), which is still in operation.

The orbiters' data revealed ice deposits at both poles, as expected. But there was a surprise as well: A large patch of ice exists near each pole, in a spot offset from the true pole by 5.5 degrees. Moreover, these "displaced" deposits are positioned such that a straight line drawn through the center of the moon would connect them.

Siegler and his team have an explanation for this finding, which they report online today (March 23) in the journal Nature: The moon's rotational axis has shifted by 5.5 degrees over the ages, and the offset ice patches mark the "paleopoles."

Modeling work suggests these paleopoles were the actual poles about 3 billion years ago, Siegler said.

"Models are models, so you can make the migration happen any time between 1.5-4.5 billion years ago depending on how you tweak parameters (such as the past rigidity of the lunar crust), but it most likely was around 3 billion years ago," he said.

The lunar poles then shifted by about 125 miles (200 kilometers) over the course of one billion years or so — a rate of 1 inch (2.5 centimeters) every 126 years, the researchers think.

"This was such a surprising discovery. We tend to think that objects in the sky have always been the way we view them, but in this case the face that is so familiar to us — the Man on the Moon — changed," Siegler said in a statement. "It would be as if Earth's axis relocated from Antarctica to Australia. As the pole moved, the Man on the Moon turned his nose up at the Earth."

The most likely driver of this "polar wander" was a shift in the internal distribution of lunar mass, the researchers said.

"Planets can change their orientation if their internal mass distribution changes. Pockets of dense material tend to be close to the equator to minimize the planet's spin energy," Ian Garrick-Bethell, of the University of California, Santa Cruz, explained in an accompanying "News and Views" article published in the same issue of Nature.

"If a huge pile of lead weights sud­denly appeared in New York, the city's latitude would eventually shift to a position slightly southward, because of planetary re-orientation," Garrick-Bethell added. "The opposite is also true — if New York sud­denly became lower in density, it would shift northward."

Siegler and his team think they have figured out where this mass shift on the moon occurred. Their work points to the Procellarum KREEP Terrane (PKT) region on the lunar nearside, which was volcanically active long ago. Volcanism in the PKT area about 3.5 billion years ago began heating up the mantle there, creating a "low-density thermal anomaly" — hot rocks are less dense than cool ones — that caused the polar shift, the thinking goes.

"This giant blob of hot mantle was lighter than cold mantle elsewhere," Siegler said in the statement. "This change in mass caused Procellarum — and the whole moon — to move."

Study team members think the polar ice predates the moon's axis shift, which suggests that the material is very ancient indeed. So the new results could help scientists get a better handle on the origin of Earth's water.

"The ice may be a time capsule from the same source that supplied the original water to Earth," Siegler said in the statement. "This is a record we don't have on Earth. Earth has reworked itself so many times, there's nothing that old left here. Ancient ice from the moon could provide answers to this deep mystery."

If the interpretation advanced by Siegler and his colleagues is correct, it raises a new question, said Garrick-Bethell.

"The moon's volcanism mostly stopped 3 billion years ago, which means that the PKT has probably been getting colder and denser since then, not hotter," he wrote. "The direction of polar wander during this period would therefore have been in the oppo­site direction to the wander that produced the ice paleopole."

So researchers do not yet have a full understanding of "true polar wander" (TPW) or the mechanisms that drive it, the researchers said. Indeed, more work is required to achieve this goal, Siegler and his team stressed.