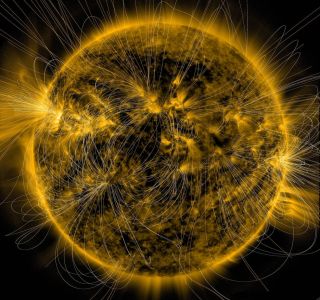 Think of it as the giant Koosh ball in the sky.

A dazzling new image depicts the sun's many magnetic field lines, which snake all around Earth's star but are densest near sunspots. These darker and slightly cooler regions on the surface are where solar flares and huge eruptions of plasma called coronal mass ejections (CMEs) originate.

While the image of the sun's surface and atmosphere is real — it was captured Saturday (March 12) by NASA's Solar Dynamics Observatory (SDO) — the magnetic field lines are an illustration that was created with the aid of a computer model.

"The complex overlay of lines can teach scientists about the ways the sun's magnetism changes in response to the constant movement on and inside the sun," NASA officials wrote in a description of the image, which was released Tuesday (March 15).

Solar flares, CMEs and other forms of variable solar activity can have a profound effect on Earth. For example, CMEs that hit the planet can trigger powerful geomagnetic storms that have the potential to temporarily disrupt power grids, radio communications and satellite navigation. So scientists are working hard to get a better handle on the ultimate driver of such activity: the sun's complex and ever-shifting magnetic field.

Indeed, this is the chief focus of the $800 million SDO mission, which launched in February 2010. SDO's high-definition images are helping researchers figure out how the sun's magnetic field is produced and structured, knowledge that should shed light on solar variability and that could aid in the development of a predictive capability for space weather, NASA officials have said.

And just in case you don't know what a Koosh ball is — not everyone grew up in the late 1980s and early '90s, after all — you can see a video of one being subjected to death by liquid nitrogen here: https://www.youtube.com/watch?v=-0y-xPG5n5g.