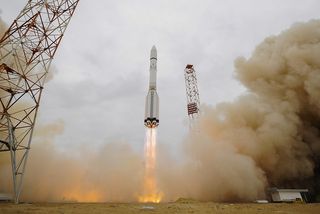 The first phase of the European-led ExoMars program blasts off on March 14, 2016 from Baikonur Cosmodrome in Kazakhstan.
(Image: © ESA–Stephane Corvaja, 2016)

Two European Mars probes survived their launch in good shape today (March 14) and are officially on their way to Mars.

The Trace Gas Orbiter (TGO) and Schiaparelli lander — the first phase of the two-part, European-led ExoMars life-hunting program — phoned home today on schedule at 5:30 p.m. EDT (2130 GMT), 12 hours after blasting off together from Baikonur Cosmodrome in Kazakhstan.

"We have a mission, and for the second time, Europe is going to Mars!" ExoMars flight operations director Michel Denis said from ESA's control center in Darmstadt, Germany, just after TGO's signal was received. "Go, go, go, ExoMars!" he said.

The European Space Agency's (ESA) first Mars mission was Mars Express, which launched an orbiter and a lander in 2003. The orbiter is still operating at the Red Planet, but mission controllers lost contact with the lander, known as Beagle 2, shortly before it touched down.

TGO's main goal is to hunt for methane, a possible sign of Mars life, in the planet's atmosphere. The spacecraft will also map subsurface hydrogen deposits and scout out possible landing sites for the second phase of the ExoMars program, a life-hunting rover that's scheduled to launch in 2018. (TGO will also serve as a communications relay between that rover and mission control back on Earth.)

Schiaparelli will gather some environmental data on the Martian surface for a few days, but the probe's main job is to test out entry, descent and landing technologies for the 2018 rover.

ESA is partnering with Russia's federal space agency, known as Roscosmos, on the ExoMars program. The Russian agency is providing Proton rockets for both launches, the landing system for the 2018 rover and some scientific instruments.

NASA was ESA's original ExoMars partner, but the American space agency dropped out of the project in early 2012, citing budget issues.