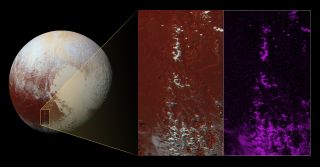 Some of Pluto's frigid peaks are capped by ice, but it's more exotic than the frozen stuff we're used to here on Earth.

A newly released image captured by NASA's New Horizons spacecraft during its historic Pluto flyby in July 2015 shows bright material atop the tallest mountains in a 260-mile-long (420 kilometers) chain in the southeastern part of Cthulhu, a dark-red region that's bigger than the state of Alaska.

"That this material coats only the upper slopes of the peaks suggests methane ice may act like water in Earth's atmosphere, condensing as frost at high altitude," New Horizons science team member John Stansberry, of the Space Telescope Science Institute in Baltimore, said in a statement.

Pluto's mountains themselves — some of which are about 2 miles (3.2 km) tall, rivaling the United States' Rocky Mountains in height — are probably made of water ice, the material that makes up the "bedrock" on the dwarf planet, New Horizons team members have said.

New Horizons' July 14 flyby, which took the spacecraft within just 7,800 miles (12,550 km) of Pluto's surface, revealed the dwarf planet to be a complex world with surprisingly diverse landscapes. For example, in addition to the towering mountains, Pluto hosts a vast nitrogen-ice plain known as Sputnik Planum, which lacks any detectable craters.

Sputnik Planum's unblemished surface indicates that the region was resurfaced very recently, which in turn suggests that Pluto harbors an internal energy source (which drives the resurfacing). What that energy source may be remains a mystery.

The Cthulhu area probably owes its red hue to the presence of tholins, complex organic molecules that form when methane is exposed to galactic cosmic rays and ultraviolet radiation from the sun.

New Horizons captured the recently released image at a distance of 21,100 miles (33,900 km) from Pluto, about 45 minutes before the probe made its closest approach to the dwarf planet, NASA officials said.